Back in the first season of Saturday Night Live, '75, they did a parody piece where Garrett Morris had a charity called the White Guilt Relief Fund which really asked for money to be sent directly to him.  Life imitates art, as they say.  Today, the Daily Caller's DC Morning carried the story,


Liberal black activists have launched a monthly “subscription box” designed for white people “to not only financially support Black femme freedom fighters, but also complete measurable tasks in the fight against white supremacy.”

The subscription service is called Safety Pin Box and was launched last week.
...
The group is headed by Leslie Mac and Marissa Jenae Johnson. Johnson is one of the Black Lives Matter protesters who interrupted Vermont Sen. Bernie Sanders during a speech in Seattle last year.

Safety pins, or if you'll permit me to say diaper pins, have become the symbol of the butthurt Social Justice Worker in the aftermath of the Trumpening, supposedly to show solidarity with other Clinton supporters aggrieved minorities.

How it works is simple: it's a subscription service.  No, really. White people send in a set amount of money every month, and in reply are sent a series of tasks to perform as penance for their sin of being born white.


There are four different types of subscriptions offered by the group. The “e-ally box” is $25 a month and is “an electronic form of solidarity.” It comes with “exclusive ‘calls to action’ when urgent ally services are needed in times of crisis.” Ally is a term used by Black Lives Matter activists to describe white comrades.

There is then the “pin pals box” which is a box shared by two white people for $100 total. Lucky subscribers get a “physical ‘safety pin’ box shipped to one address with guided two-person tasks for the month.”

There is then the “premiere” box subscription which costs $100 a month. This includes a “physical ‘safety pin’ box shipped to you with guided ally tasks for the month. Tasks will vary in scope from individual to group assignments, and task categories include data collection, personal development, influencing your networks, and showing radical compassion.”

41 Years ago, Garrett Morris put it this way:


Hi. I'm Garrett Morris, talkin' to all you white Americans about the way black people have been treated in America. Now, I know a lot of you feel guilty -- and you should. My great-great-grandmother was brought over here on a slave ship and was raped by her white master. And my grandfather was lynched by a mob for not tippin' his hat to a white lady. Now, they're dead now and there's nothing you can do to erase their suffering. However, if you would like to relieve your guilt, I am willing to accept money as a representative victim of four hundred years of repression. Send your check or money order to White Guilt Relief Fund, care of Garrett Morris, 870 West 127th Street, New York, New York 10089

Self-service extortion by mail.  The remarkable part, though, is that it's not the first time something like this has been tried.  In August, Natasha Marin (a black woman) started a website for voluntary reparations payments.  Reparations.me has a Craigslist-like layout where non-white people post their requests for reparations from white people. White people can fulfill requests as well as post their own offers of reparations.  Requests run from specific amounts of money to things like cars or to help with various things.

There's no word on how well that worked out for them, but the website seems to alive and in use. 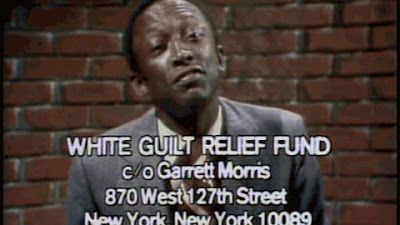 They say that PT Barnum didn't really say, "there's a sucker born every minute", but somebody did.  That quote fits well right about here.