While the electronics trade press generally focuses on the "glamor" side of the industry: the continually shrinking device geometries, we've already talked about how the majority of integrated devices use older larger processes.  Working with those smaller geometries is simply much harder than working with geometries that are bigger than 50 nm.


[We present data] showing that 43% of worldwide semiconductor production is in the five largest geometries: from 65nm up to the largest sizes used.  Further, the graph on the right shows that 85% of new designs are 65nm and larger, up to even 500 nanometer geometries.

The difficulties with the single-digit nanometer geometries don't stop with simply producing them photographically via the still exotic and expensive extreme ultraviolet lithography. The difficulties include connecting the transistors to the outside world.

In November, Design News highlighted the use of DNA molecules to self-assemble wires for this use.


Scientists at the Helmholtz-Zentrum Dresden-Rossendorf (HZDR) and Paderborn University have conducted a current through gold-plated nanowires that independently assembled themselves from single DNA strands.

The research paves the way for new methods to devise even smaller wires, circuits, and other electronic components, which traditionally have led to innovation in technology design and development, said Artur Erbe, research leaders at HZDR’s Institute of Ion Beam Physics and Materials Research. [Note: all the universities in this article are from Germany -  SiG]

In order to produce the nanowires, the team combined a long single strand of genetic material with shorter DNA segments through the base pairs to form a stable double strand. The DNA had gold-plated nanoparticles bonded to the individual nucleic acids in the strand, so that when the DNA assembled itself as it was programmed to do, the gold particles formed a continuous string of gold - a gold wire.  Using this method, the structures independently took on the form desired by researchers, Erbe said.


“With the help of this approach, which resembles the Japanese paper folding technique origami and is therefore referred to as ‘DNA origami,’ we can create tiny patterns," he said. “Extremely small circuits made of molecules and atoms are also conceivable here.”

I want to caution you that the extremely highly magnified images of this assembly don't look pretty, but the results function well as wires.  Have a look:

The wire looks more like a string of beads than a wire.  This is preliminary work, but these researchers are developing almost everything they do.  The paper focuses on exactly how they prove that these things are really wires; that there's really continuity and electron conduction through the obviously lumpy structures.  The authors say the structures they've created act like wires at room temperatures, but at low temperatures they can behave differently:

Again, this is preliminary work, but it's pretty interesting.  DNA is unique in its ability to self-assemble, and researchers have developed ways of getting DNA to produce the shapes they want through this so-called DNA origami.   It seems natural to combine them into folded structures that do the things we want them to do, and not just make cool pictures.  Making faster/better processors and digital circuits seems like a good use. 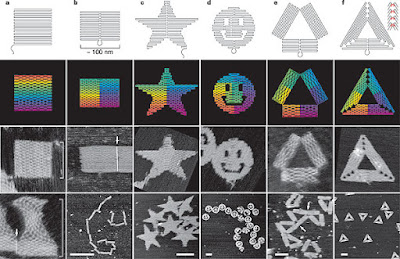 DNA Origami: from the plans to electron microscope photos, top to bottom.  (Source)