Will The Next Battery Breakthroughs Be Capacitors?

Researchers at the University of Central Florida announced that they've developed a new type of supercapacitor that can substitute for a battery in consumer electronics.  As anyone who has had a rechargeable battery can tell you, they eventually fail to charge quickly and then discharge quickly.


The novel method from the University of Central Florida’s NanoScience Technology Center could eventually revolutionize technology as varied as mobile phones and electric vehicles.

“If they were to replace the batteries with these supercapacitors, you could charge your mobile phone in a few seconds and you wouldn’t need to charge it again for over a week,” said Nitin Choudhary, a postdoctoral associate who conducted much of the research published recently in the academic journal ACS Nano.

The key, of course, is the material they developed that allows the capacitor to be made much smaller than previous supercaps.  The team at UCF worked with newly discovered two-dimensional materials only a few atoms thick and made them to supercapacitors.  Other researchers have also tried formulations with graphene and other two-dimensional materials, but with limited success.

A part I found particularly interesting was this:


[A] lithium-ion battery can be recharged fewer than 1,500 times without significant failure. Recent formulations of supercapacitors with two-dimensional materials can be recharged a few thousand times.

By comparison, the new process created at UCF yields a supercapacitor that doesn’t degrade even after it’s been recharged 30,000 times.

The part I didn't see them mention is how to get that much charge into the phone.  When everything is said, a capacitor is tank that holds electrons.  Those electrons are pumped into the storage tank and then drained out during use.  That means if "you could charge your mobile phone in a few seconds and you wouldn’t need to charge it again for over a week" you need to put in the same number of electrons in those few seconds that the phone drains out for over a week.  It's only slightly imprecise to say another word for the number of electrons per second is the number of Amps of current flowing into and out of the capacitor.  As an example, my phone battery is about 1600 milliAmpHours, and remember one milliAmpHour is 1 milliamp times 1 hour.  To charge that, I put a smaller number of milliamps into the phone for more hours, say 400 mA for a bit under 4 hours.  To charge that in one hour, we're back at 1600 mA.  To shove in the same number of electrons in 10 seconds, 1/6 the time, that current becomes 6 times larger: 9.6Amps.  Now add in that my battery may last one day, and they're saying, "you wouldn’t need to charge it again for over a week" and the number of electrons gets even bigger; now maybe we're talking about 68 Amps.

Think of a charger cord the thickness of car jumper cables rather than the skinny little USB charger cable you currently use.

There are other problems, but let's leave it here. 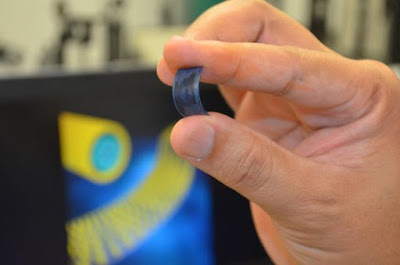 A sample of the nanomaterial they used. (UCF Photo)