Not so much a bad Monday, but an unusual Monday.  Let me recap a little.

I wrote last Tuesday about finding issues with my Sherline CNC system losing motion on its X-axis.  I ordered replacement parts from an online seller I've bought from in the past: two of the couplers, two of the preload nuts, and two packs of two of the 5-40 screws, on Wednesday.  Those parts arrived on Friday and the company royally screwed up the order.  I received four of the couplers instead of two, none of the preload nuts, and one of the packets of 5-40 screws instead of two.  Contacted the company.  "No problem, we'll fix it".  The replacement parts arrived today, and once again, they completely screwed up the order.  This time I received another two couplers, none of the preload nuts, and one single 5-40 screw.  I'm at a loss for what to do here.  I have six couplers (I needed one, but ordered two), no pre-load nuts and three 5-40 screws.

Before that, I took some photos of the way the leadscrew and 5-40 screws appeared damaged.  The leadscrew's end, before: 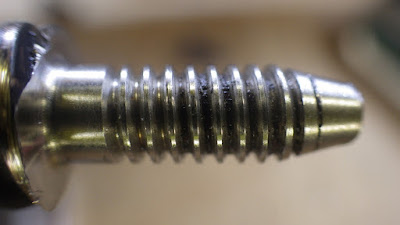 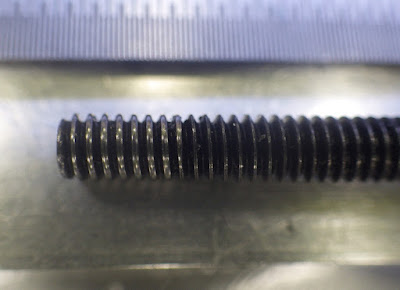 I ran a die over the 1/4-20 threads and they look much better.  A new nut from the hardware parts box fits much better than before.  I don't have a die for the 5-40 threads, and the screws are cheap enough that I figured I could buy some easily enough, since I needed to order those other parts.

Meanwhile, over the weekend, I broke out my Hornady ultrasonic cleaner to clean both the existing pre-load nut and the end of the leadscrew.  It was sounding like things were rattling too much, so I put in a bag of .223 brass that needed cleaning.  After a couple of long soaks, I took them both out.  The pre-load nut was clean even in the tight internal corners.  I ran a toothpick into the leadscrew and pulled out some black goop - probably old grease.  Did that a few times.

I received the 5-40 tap I ordered last weekend on Saturday and immediately put it to use.  It only had to cut a little at the very start of the threads, but then screwed in easily over the full length.  It also pulled out some more grease with metal flakes when I removed it, so I did that a few more times until it came out clean.  Now, one of the two new 5-40 screws fits like it should.

At this point, I'd think I could assemble the whole thing and try to find if I fixed my X-axis, but I'd still like those pre-load nuts.  The difference between a pre-load nut and a standard issue 1/4-20 hardware store nut is that one face is milled flat and then recessed for the diameter of the end of the coupler to fit into the nut, to maybe 0.1" deep.