Just Between Us Folks

I see nothing in the Trumpening or anything else going on to make me think we're not headed for all out economic collapse.  While I'm really encouraged by information coming out like what Borepatch linked to today, I'm also concerned about the widespread mention of Too Big To Fail bankers (beyond Treasury Secretary nominee Mnuchin) being appointed into the administration.

As usual, I can't say when because there are just so many variables here, the biggest being that the US isn't the only country in trouble.  If that was the case, it would be easier.  Instead we have the central banks in Japan, the EU, China and the BRICS all taking heroic measures to restore growth.  Simply, the world can't continue to grow at the rate we went through right after the decoupling of the dollar from a commodity standard.  Take a look at this plot from Chris Martenson at PeakProsperity.com.  Although this curve is now 6 years old, look at the amount of debt growth since 1989; not just federal spending but state spending, student loans, corporate spending and even consumer debt.  It's all debt we need to crank out of the system. Even if we returned it to about half of the growth since 1980, 260% of GDP, it's still a tremendous amount of debt to pay off. 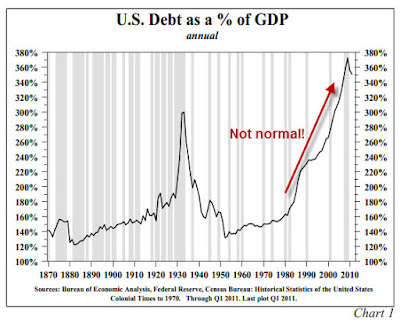 If countries aren't allowed to have infinite debt, they need to follow the same principle we all follow: at some point, the payments become uncomfortable and we stop spending as much.  Again, if we're not allowed infinite debt, it's simply not possible to grow your debts faster than your income forever.

Chris Martenson does a guest post a Glenn Beck's website, and explains the math.  It's absolutely essential we all understand.


Let’s start in 1980, when credit growth really took off. This period also happens to be the happy time that the Fed is trying to (desperately) recreate.

Between 1980 and 2013, total credit grew by an astonishing 8% per year, compounded. I say ‘astonishing’ because anything growing by 8% per year will fully double every 9 years.

So let’s run the math experiment as ask what will happen if the Fed is successful and total credit grows for the next 30 years at exactly the same rate it did over the prior 30. That’s all. Nothing fancy, simply the same rate of growth that everybody got accustomed to while they were figuring out ‘how the world works.’

What happens to the current $57 trillion in TCMD as it advances by 8% per year for 30 years? It mushrooms into a silly number: $573 trillion. That is, an 8% growth paradigm gives us a tenfold increase in total credit in just thirty years 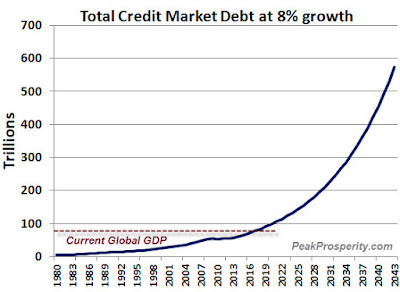 If that comparison didn’t do it for you, then just ask yourself: Why, exactly, would U.S. corporations, households, and government borrow more than $500 trillion over the next 30 years? The total mortgage market is currently $10 trillion, so might the plan include developing an additional 50 more U.S. residential real estate markets?

The next 30 years simply can't look like the last 30, not because "everything has already been invented", like socialist darlings Thomas Pikkety and Paul Krugman say (and let me remind you Krugman is the guy who thought an alien invasion would be a good economic stimulus).  Where do you get 50 US housing markets to build in 30 years?  As I've said before, if you're going to sell bonds to borrow a large number, say $10Trillion, you can only sell those bonds to someone who has $10T lying around and can buy your bonds.  There are very, very few places to sell that amount of debt, and those places all have their own problems.  Growth can't continue at the 8% compound rate because the world has borrowed ahead so much that spending has to slow down to pay off the debt.  The only thing that borrowing can do is move future growth (purchases) forward in time.  As is the case with credit card debt, at some point, the consumer has to pay the debt down.

It's my belief that the trigger for this isn't going to be something like a routine act that one of the countries goes through: something like the Fed raising interest rates or Italy leaving the EU.  There's enough warning for the systems to adapt, and develop ways around.  Rather it will be an accident: something like a major financial house going broke (cough.. AIG) or perhaps some posturing between countries that leads to shots being fired.  Perhaps even metaphorical shots, like a trade war.  On that front, I tend to agree with the idea that Trump can't start a trade war with China: it's already going on.