Solar Study Shows Best Predictions for The Next Maunder Minimum

Probably the best argument I've seen for the view that our next Maunder or Dalton Minimum is coming soon comes from Nature Science Reports in October of 2015.   Researchers Simon J. Shepherd, Sergei I. Zharkov, and Valentina V. Zharkova (who are not strangers to these pages)  performed a new type of analysis of solar data.

In the abstract of the paper, the authors say they obtained full disk magnetograms of the sun and derived ways of describing the Principal Components (PCs) of two main, time-varying magnetic waves found in the magnetogram data.  They observed that these magnetic waves in the Solar Background Magnetic Fields have opposite polarity, i.e., originating in the northern and southern hemispheres, respectively.  Over a duration of one solar cycle, both waves are found to travel with an increasing phase shift toward the northern hemisphere in odd cycles (21 and 23) and to the southern hemisphere in an even cycle (22).  They were able to derive equations that described those waves, and see that at times the waves coincide well and the sun is more active, while at other times the waves partially cancel each other out producing a quieter sun.  Taking these equations they then extrapolate the PCs backward and find two 350 year long cycles superimposed on the 22 year sunspot cycles we're all familiar with.  The results show a remarkable resemblance to sunspot activity reported in the past including the Maunder and Dalton minima.  Cutting to the chase here, when they run these predictions into the future, they find the next grand minimum is coming soon in cycles 26-27 (we're currently in the end years of cycle 24).   That's around 2028 or 2030 and go forward 22 years. 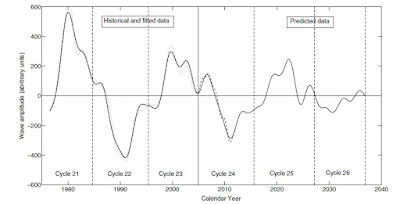 The fit of the Eureqa-distilled law (the solid curve) to the summary component in cycles 21–23 (dotted curve) and its expansion to cycles 24–26.  Dashed curves show the predicted summary curve compared to the real PCs derived from the SBMF in the cycle 24 with an accuracy better than 98%.

My standard disclaimer goes here:  I'm wary of predictions for another Maunder minimum, or another Carrington Event on general principles.  In the case of the Maunder minimum, it was severe and we simply don't have detailed data records of what the preceding cycles were like, to the level of detail we could produce in the last hundred years.  There was nothing like the solar instrumentation we had even 50 years ago, let alone now.  This study's predictions are based on analysis of only three cycles worth of data.  I don't know how long magnetograms have been available that show lines of magnetic force going back to the sun, but with 24 cycles, I'd like to see more than three.  Still, even a prolonged minimum that isn't as severe as the real Maunder minimum seems like it could be really bad.  It seems any deep sunspot minimum correlates with colder temperatures.  Despite what the alarmists say about Global Warmening,  mankind has done better in warm periods than in the cold periods in our history (huge pdf alert - but fascinating reading).  Of course the cool kids (or the kids who consider themselves cool) say not to be concerned about the Maunder Minimum because the warmening will wipe out any cooling and you skeptics are silly to trust these predictions - and a few other things that are demonstrably wrong, too.

On the positive side, these researchers' main approach is similar to a signal processing approach I've seen used successfully many times.  The agreement of their predictions with measured data given their small study sample is impressive.  In fact, I think it's the most persuasive study I've seen that says a deep minimum is coming.  By this prediction curve, it will be much shorter than the Maunder minimum, and the next grand minimum, in about 2300 to 2400 looks more like the Maunder.