It was a busy day here as we had a house repair that had to be done, and something we wanted to get done.  Since it's a holiday, I'll emphasize the "want to do".

Regulars here know I'm a barbecue guy.  I currently own three smokers: two electric and one wood-fired.  For the last year, I've been using this one exclusively.  The wood-fired version, called a Char-Griller with a side box, is also capable of grilling, and can handle lots of food at once.  Something I've never done is the specialty called cold smoking.  This is the kind of smoking that used to be done with a separate smokehouse that sausages, whole hams, and other meats or fish would hang in while smoke from a separate building would be piped into the smoke house.

Cold smoking, as the you'd think, is done with foods kept cold.  Two common examples are smoked cheeses and lox (different from regular, hot-smoked salmon), but people also add smoke flavoring to salt, crackers and other things this way.  All of the electric and wood fired smokers are hot smokers and the electric smokers typically produce smoke best when their chamber temperature is 200 or over.  A block of cheese would melt into a puddle at that temperature.

So for Christmas, Mrs. Graybeard and I got ourselves an attachment for our electric smoker to allow us to experiment with cold smoking.  It's not apparent from the main picture at that Amazon ad that it's sized to fit right next to the digitally controlled smoker and plug right into its wood chip tray as you can see here.  Today was my day to try it out. 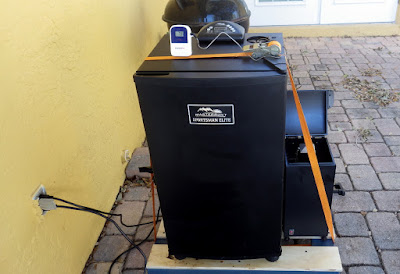 That's the 30" digital smoker with the side cold smoking attachment.  (Yes, that's a Weber grill behind it.  What can I say?)  When you cold smoke cheese, my project for the first half of the day, the big electric is turned off, and the side box generates the smoke.  Since the smoke itself is going to be warm, it's common practice to put ice in the smoker under the cheese to keep it cold. 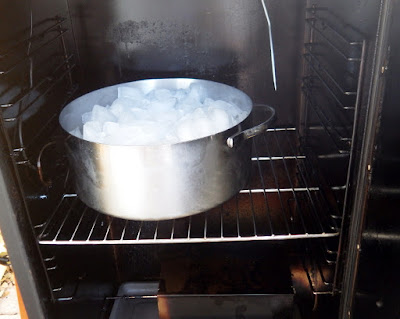 Folks up north talk about cold smoking when the smoker is covered in snow, so I'm sure their chamber temperatures are lower than what I could get here.  With the smoke going, the temperature probe (hanging from top right) registered 65 to 70 degrees (70 F, not C).  The rule of thumb on this recipe is to smoke it for 2 hours and then let it rest for a few weeks in the refrigerator.  Many people vacuum pack the cheese or wax coat it (just kidding) and won't touch it for a year.  Since it's our first batch, we'll probably try some in a month. 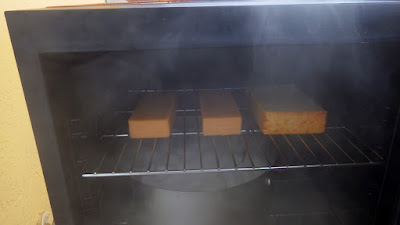 My other thing to try with the side smoker is some smoked salmon; hot-smoked, not cold-smoked lox.  This is done by brining the fish overnight before smoking it.  As you might imagine, that means soaking them in a saltwater solution.  While the cheese was in the smoker, I prepared the salmon, rinsing off the brine and then letting it dry in the room temperature air.  It went into the smoker and the electric smoker was set to a chamber temp of 100 for an hour and then 150 for another couple of hours until it finished (internal temperature of the salmon at 145).  So why not use the digital smoker itself?  While it can generate temperatures as low as 100, it won't generate smoke when the heating element is that low.  The only way to get enough smoke to flavor the salmon is to run the side smoker box to generate the smoke and just use the digital smoker as a low temperature oven. 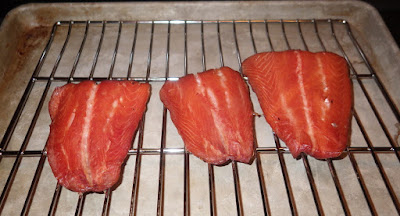 The three slabs of salmon fillets weighed a pound all together, and turned out great.

I learned a bit about using the side smoker box today.  Another feature I'm hoping it can bring us is the ability to smoke long periods without as much baby sitting as the digital smoker requires.  One drawback to the digital smoker is that the chip load it can handle is small, and chips need to be replenished every 45 minutes to an hour.  The side box is supposed to be able to smoke for up six hours, which would be much more handy for a long duration smoke, like 16 hours for a Texas brisket.  To have brisket for dinner at 6PM means starting it at about midnight the night before and running the smoke until around 4 the next afternoon.  I hope to get this to work well enough to do that soon.