Lessons I'd Rather Not Learn

Tonight, the long saga of the ballnut removal tool, or the BRT.

One of the more involved parts of the CNC conversion I've been working on since I retired is the Y-axis (last Friday was my 1 year anniversary).  There simply isn't much room in there to do much work, and to complicate things even farther, during the development of this system, the originator of the plans I bought, Hoss, moved the Y-axis motor mount from the front to the back of the mill.  This resulted in at least three versions of the Y-axis ballscrew.  I had wanted to front mount my motor, although it might provide a little more range on the Y-axis to use the back, but when I ordered my ballscrews, I wasn't aware of this.  I emailed the vendor and mentioned "Hoss DVD CNC Conversion" and he said, "Oh, that's a standard product" and gave me the quote.  I received a version of the leadscrew that sticks farther out of the front of the mill than a later version does.  No problem, this is taken up in an external spacer (which I pictured here), also available on the DVD.

To put the ballscrew/nut and mounting piece in the base, the ballscrew needs to be removed, and the machined end pushed through the front of the base.  Then you hold the ballscrew end in one hand, the ballnut/mount and BRT in the other, and screw the ballnut/mount back onto the screw.  Hoss made a simple tool to remove the ballnut.  The drawings for this are on the DVD, along with drawings of the various versions of the Y axis.  He printed it on a 3D printer, probably in PLA plastic.  It looks like this: 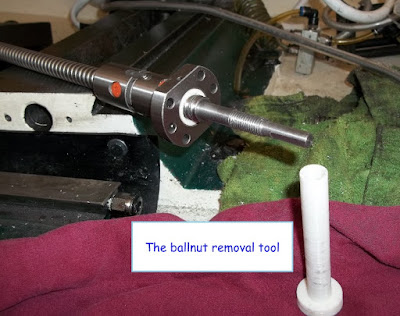 It's roughly the length of the ballnut, and has a 0.400" central hole down its axis to fit over the machined end of the ballscrew.  Dead simple.  In use, the ballnut/mount combination is unscrewed onto the tool, the tool is pulled off the screw, and the whole combination wrapped up with a zip tie or something so that the tool and ballnut don't separate. See, the only thing that holds the balls in the threads of a ballscrew/nut combination is the presence of the ballscrew or something in its place.  If there's no ballscrew, or no BRT, you suddenly find yourself with a mess of loose ball bearings migrating to every corner of the house.

A while ago, I bought a Delrin rod to machine a BRT, and while trial fitting it, I found my major problem.  My ballscrew isn't like the one pictured above.  Mine has a longer machined section, and has a part immediately before the ballscrew threads about 1-1/8" long that's 0.500" diameter.  The trick is that for the ballnut to screw onto the tool, it has to match the minor diameter of the threads, about 0.530" inch.  To fit comfortably on the 0.500" OD, the tube ID has to be a bit larger, perhaps 0.505".  That leaves .025" in diameter, so the wall thickness goes down to about .012".   While I was trying to machine this, I pushed the live center on the lathe too far forward and the tube crinkled.  With a wrinkle in the plastic, the next time the cutter got to that point, it tore the Delrin.

Unfortunately, when I ordered the Delrin, I forgot the motto "two is one, one is none" and now I had no way to make another.  While there is no force on the tube when the ball nut is on the BRT, it has to be tough enough to be machined.  I didn't have any other plastic lying around the house, but I did have some pieces of 12L14 steel about 3/4" diameter and long enough.  Steel sounded like it has to be tougher than the Delrin plastic and I machined a replacement BRT out of steel. 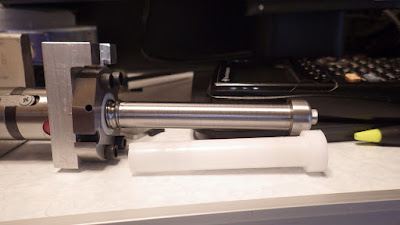 OK, should be good to go, right?  Not quite.  When I tried to unscrew the ballnut onto the BRT, it took some effort.  I unscrewed the nut and saw that the ball bearings were pushing into the thin steel wall of the tube and creating matching threads in it.  After about 1 turn, I couldn't make it unscrew any farther.  So back to the lathe to gently skim a few thousandths off.  Only the piece moved on the lathe - it was too thin to hold tightly the way I had it.  Again, I had a damaged BRT and no hope for a workable one.  All of this for what's very likely to be used once and put on the shelf.

Yesterday, it occurred to me that if I had a piece of the threaded portion of the ballscrew, it's a standard profile, I could just unscrew the nut onto that and then put it back in place once the screw is in the base.  I asked on a forum I belong to, and was told, "You are way over-thinking this. When you buy a ball nut separate they come with a cardboard tube inserted into the nut to keep the balls in place. "  Cardboard tube?  Like this? 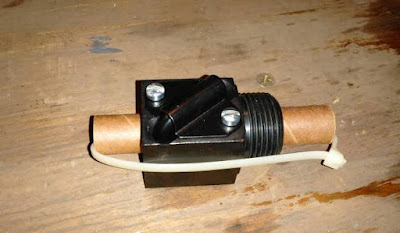 The writer went on to say, "Without having the original cardboard tube, I have simply taken a piece of paper, formed it into a tube, and then wrapped it with masking tape to build the thickness and diameter to where it needs to be and then slid the ball nut off of the screw and onto it".  I thought one of those terrible thoughts, "how hard can it be?"  In the engineering world, this considered on a level of pure badness about equal to "all you gotta do", which is the most horrifying phrase in all of engineering, and usually precedes the worst times in your career.  Indeed, "how hard can it be?" preceded the worst moment in this story.

Realizing I need about .012 to .015 wall, I wrapped three turns of printer paper around the leadscrew, ran masking tape down it, then tried to unscrew the nut.  Didn't work. It started binding and when I unscrewed it back into place, I could see the same problem I had with the first two tools - the balls were trying to create matching screw threads in the paper.  So I pulled most of the tape to make the tube thinner and started again.  This time it was unscrewing onto the paper without binding.  I guess I thought, "holy crap! it's actually going to work." and kept going.  A few seconds later, I heard the balls falling into the folded over paper end in my left hand.  At this point, it was over.  I unscrewed the leadscrew the rest of the way and found that the last few threads in the nut were exposed and the balls fell out of that.  I think I caught all the balls and none escaped, but I won't know until I put it back together.  I put tape over both ends of the ball nut and paper cup (folded over paper tube) so that the balls don't escape. 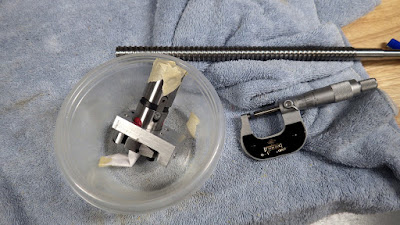 I'm told it's really not a big deal to re-ball one of these.  The first time is likely to take me close to an hour, but if I do it a few times, I'll get it down to 10 minutes or so.  My main fear is that the balls have escaped and ended up in another space/time continuum.  The micrometer in this pic is to measure some of the loose balls (.1242").  I should order some spares.

Another user on that forum I went to said they did a similar path to me.  Tried plastic a few times, then machined one out of aluminum, and then ended up dumping all the balls into something and re-balled the screw.  I really don't want this lesson, but it sounds bad to say my goal is to need an hour to re-ball the screw, and not do it often enough to do it in 10 minutes.  I have things I want to use the tools for, not just make tools.