Have The Tea Party's Killers Hit the Gunnies, Too?

Last August, I wrote a piece on how the Tea Party was killed off.  In brief, they were killed off by professional fund raisers and political activists: the very thing the Tea Party got started to kill off.

Miguel at Gun Free Zone posted a piece today about the National Association for Gun Rights, NAGR, and I find the parallels striking. Miguel, in turn, links to an old article on the Blaze, that's sill relevant.


As it turns out, NAGR is just one of a pack of ankle-biter groups, all of which trace back to Mike Rothfeld. Among this web of Rothfeld groups are Campaign for Liberty, Foundation for Applied Conservative Leadership, and Council for Freedom and Enterprise.  Nice names. What they all share is the Rothfeld secret sauce — best described by the wizard himself:

While most of us abhor negative campaigning, we can at least understand it as an effort to induce people to choose Option A over Option B. But that isn’t the game Rothfeld and Dudley Brown are playing.

I've mentioned before that I've been a member of NAGR before and became displeased with them for a couple of reasons.  The biggest is the never ending stream of emails like the previously mentioned "stop what you're doing!", urgent response required type.  The legend of the "boy who cried wolf" that we learn while we're growing up is a good one to keep in mind.  Perhaps a better idea to keep in mind is that when someone is urgently demanding your money now, now, now, experience says the chances are good you're being hustled.  They want you to donate the money now and not think about it.  As the author of that original Blaze piece put it


Riddell’s article recounted one instance in which an NAGR Mississippi e-mail blast solicited funds to help them fight against an ammunition registration bill. The only problem was that the bill had died in committee a month before the e-mail was sent.

NAGR has branded itself as the conservative alternative to the NRA, one not beholden to Washington insiders. But some Second Amendment advocates think the group’s main claim to fame is stoking the fears of the less-informed for-profit.

Similarly, I recall a NAGR mailing from "Dudley Brown" railing against a piece of legislation in the Florida Senate that wasn't there anymore.  Rothfeld may be "damn proud" of being a spammer and telemarketer, but apparently complete truthfulness isn't one of the things the organizations are "damn proud" of. 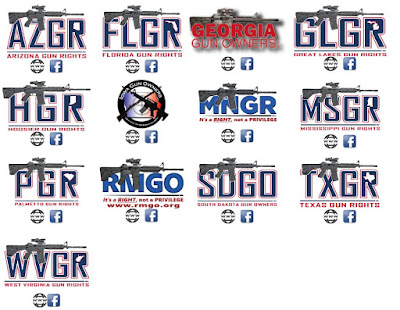 NAGR bills itself as the "No-Compromise Gun Rights Group" and attacks the NRA.  But compromise itself isn't a bad thing.  The bad thing is continually backing up in compromise and saying, "this is as far as we go" only to contradict yourself in a year or two.  Compromise on the attack is what the other side has been doing for a century and I don't think anyone would say it hasn't worked for them.  Every few years they push and push and get as far as they can.  Once they've moved the bar, (or the Overton Window if you prefer) they start from farther along "next time".  If the R2KBA side went in to this legislative session with the argument "nullify the 1934 NFA" and in September we found the best we could do was the compromise, "OK, we agree the prohibition on short barreled rifles and shotguns is silly so we'll remove that, and we'll make silencers a $5 tax, but we will not deregulate full auto weapons and we're keeping the AOW class", who wouldn't take that compromise?  Would you turn that down because it's not perfect, total victory?

Look, it's your money; give it to whom you want.  I think it's a waste to give to these Rothfeld organizations like NAGR because I see the parallels to the destruction of the Tea Party movement.  If Rothfeld's groups suck up all the funding and spends it all on themselves, like all those groups that killed off the Tea Party, could they kill off the Pro-2A side?