Fake News and The Russians

Is there anything to this story?  Not to me; at least not yet.  You're reading a guy who's motto when confronted with wild claims is "In God we trust; everyone else bring data and keep your hands where I can see 'em".  (Advertising claims and global warming scare stories are the usual triggers for that response).

Has anybody seen any data?  Someone in the CIA says it, so it must be true?  Is that like when the Mainstream Media cites "unnamed sources" that just happen to really be another reporter?  The Office of the DNI (Director of National Intelligence) doesn't buy it.  The Federal Bureau of Investigation declined to accept the CIA's analysis - a deductive assessment of the available intelligence - for the same basic reason, the three officials said: the CIA has not argued that they can know motives.  The FBI, of course, is concerned about having evidence which will stand up in court.  "The CIA dood said so" is not that kind of evidence.


The CIA conclusion was a "judgment based on the fact that Russian entities hacked both Democrats and Republicans and only the Democratic information was leaked," one of the three officials said on Monday.

The fact is that since as far back as last summer, Julian Assange has been saying it was not Russia that provided the information they published.  It was a leak, not a hack.  Voluntarily provided, not stolen.  In an interview Sunday, Dec. 11th, that was repeated.


However on Sunday Craig Murray, the former British Ambassador to Uzbekistan, acknowledged that he met the person who was responsible for publicly outing  the DNC emails, and it was not Russia.

Murray then went on to say in an interview that; “I know who leaked them, “I’ve met the person who leaked them, and they are certainly not Russian and it’s an insider. It’s a leak, not a hack; the two are different things”.

With no data published, who do you believe?  A British Ambassador or "someone at the CIA".  The guys in the CIA very likely have a dog in the fight.  It's entirely possible the Deep State is attacking Trump here, seeing if they can ruin his credibility before he even starts in office.  Of the two sides, Julian Assange and Craig Murray vs. the nameless "someone at the CIA", I think Assange and Murray are more likely to be telling the truth. 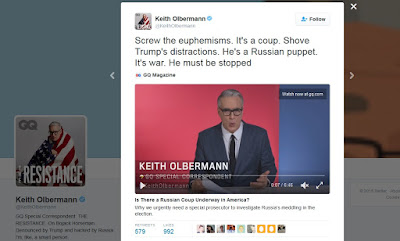 Or you could go all in, like Keith Olbermann, here, from Twittererer.  (H/T to David Codrea's War On Guns).

I propose a new unit for stupidity, in which this is a standard.  Someone really, really stupid would be one Olbermann.  When you goof up and forget your car keys, that would like a milli-Olberman.  Something exceptionally stupid, like losing all your money to a Nigerian prince email scam would be a hecto-Olbermann (100 Olbermanns).  No one has ever lived through a kilo-Olbermann worth of stupidity.