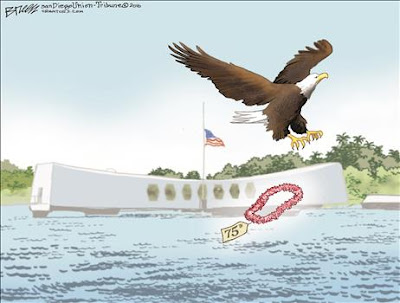 White House Press Secretary Josh Earnest telling WWII survivors to "get over" being bombed at Pearl Harbor may be more than the Obama's typical tone deafness.  It may be the typical Obama administration response that America must have deserved to be bombed.  It was said in the context of some Americans saying that since Obama apologized for Hiroshima, Shinzo Abe should apologize for Pearl Harbor, which he refuses to do.


Abe announced Monday that he would become the first Japanese leader to visit the Hawaiian naval station since it was bombed by Imperial Japan on Dec. 7, 1941. The visit is in response to Obama’s visit to Hiroshima, the site of the first atomic bomb drop.

Personally, I'm more OK with Abe not apologizing than Earnest telling people to "get over it".  I don't care if Abe is visiting Pearl Harbor and I didn't care when Obama was visiting Hiroshima, although his apologizing for the bombing irked me.  "Symbolic visits" mean nothing to me.  Shinzo Abe is no more responsible for bombing Pearl Harbor than Obama is responsible for nuking Hiroshima.  I believe in individual action, individual freedom and its concomitant responsibility.  Neither of these guys was alive in those days and played no part.

It's the same logic that says there's not a single person alive today that owned slaves in 1860s or that was a slave in the 1860s so no one deserves reparations and no one is responsible for providing them.

As I write this, it's about 12:30 PM, EST.  75 years ago at this time, 7:30 AM Honolulu time, the radar operators outside Pearl Harbor were seeing the first returns of the massive air invasion about to happen.  The first wave of the attack hit at 7:55 AM.

I find it interesting that the current search radar there is still one of the most powerful search radars in the world.