In addition to the major things I write about here, my Grizzly G0704 CNC conversion and all the things that entails, I also work on some other things.  As a side or back burner project for a while, I wanted to make another one of those tools frequently used by guitar technicians.  This is called a fret rocker, and the big store of special tools for guitar-tech tool-addicts carries them. 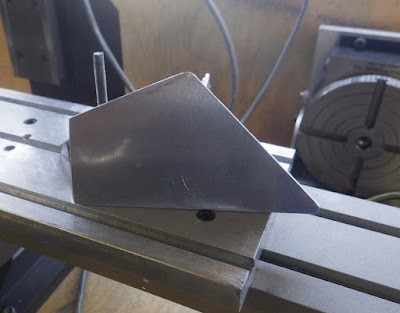 The hardest part of this was coming up with the dimensions for the four sides, which I eventually found in a description someone had posted.  Once I had the dimensions, I drew it in CAD making the shortest side and longest side perpendicular to each other, then swinging the other lines until they intersected.  It was a simple task to program where the end of tool paths should be, and program the Sherline to cut four lines.  This was before the Sherline broke, back in mid November.

Fret rockers are used to find the source of buzzing sounds while playing, and they're used by placing three frets in contact with an edge on the tool and seeing if the tool rocks.  If the tool rocks, the middle fret is high.  At the low pitch end of the neck, the long edge is needed; at the highest pitch end, it's the shortest edge and in between, you use the edge that fits.  High frets are generally tapped down with a brass or hard plastic hammer, but sometimes the frets will need some filing or sanding.

Another side project involved a little addition to my project guitar.  The guitar had been stripped of all its hardware at some point in its past, and I wanted a simple set of strap pins for it.  It ended up being a bit involved.  The bottom of the lower bout is where those pins are usually found, and I found a large hole there, around 5/8" diameter, with holes from three mounting screws.  Since this had been an acoustic electric at one time, and most of those that I've seen have the strap pin built into a 1/4" jack, the web searching began.  A bit later I determined I needed something like this.   Since there wasn't a handful of options, I figured they had to be a common size, and ordered one.  Hah!  The diameter of the hole circle on the jack I bought didn't match the hole circle on the guitar.

What to do, what to do?  Especially since the new screw holes would probably cut into old screw holes and jeopardize the fix.  Seems like a hole relocation fix is called for, one of those things you've just got to know how to do.  A conversation with my friend the luthier confirmed that in my mind and got me to think I should plug the holes with wood and redrill the holes, like the Z-axis fix I did in aluminum.  What do I plug these tiny screw holes with?  How about a hardwood toothpick?  Glue them in with Titebond and trim back flush with the surrounding wood.  Drill the now solid wood for the wood screw and assemble as usual.  Mission finally accomplished today. 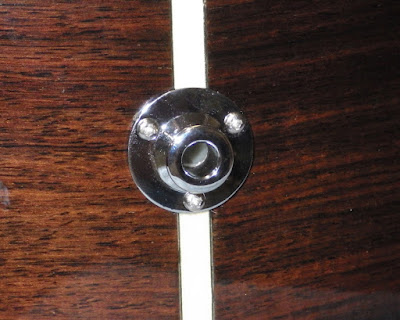 I keep pondering what to do with the missing side on this guitar.  Single sides, called orphaned sides or just practice sides, are tough to find and tend to be offered as "whatever we have on hand", the buyer has no choice of color or anything.  I kind of like the suggestion from last time of making the side a contrasting wood, a nicely figured maple would be ideal, but that appears to be just about impossible to find.  Thanks to consultations with some other folks, I've thought about replacing that side with plexiglass, but I haven't really figured out how I'd do that, so I haven't gone looking for any pieces of plastic, yet.