Tweaking And Verifying the Mill

As said last week when I said the main construction phase on my CNC mill was complete, it was time to move from construction to optimizing, and that's what I've spent the last several days doing.

The first thing to go after was backlash.  I duplicated the measurements and started with backlash of .012 on X, .010 on Y and .004 on Z.  Going after the big one is the obvious way to do this, but there's another reason that's more practical: the X-axis has an exposed end that I can put a hand wheel on to crank.  That allows me to easily feel the movement of the wheel before the table moves and it allows me to hold the ballscrew motionless while tightening some nuts against the AC bearings.  The problem I had was that I didn't have anything that fit the shaft.  The shaft is 5/16" and I had a 1/4" handwheel from my micro mill.  I was going to make an adapter that fit over the 5/16" shaft and inside the 1/4", but realized there was an easier way.  I had the original handwheels from the mill and just needed to make a collar to take up the gap between the 5/16 shaft (.313) and the handwheel (.393).  The shaft has a flat, so I drilled and tapped it for a setscrew and put the handle on it. 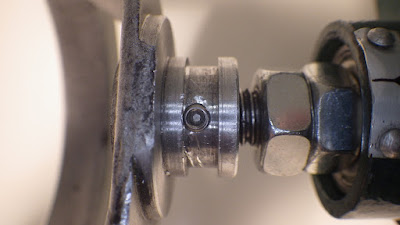 This large handwheel (about 4" diameter) allowed me to get a good measurement of the backlash.  I took photographs of the wheel before starting to crank back in the direction it came from and then as soon as I saw some motion on the dial indicator.  I tried to maintain the same camera position, getting two very similar pictures, then imported them into Rhino3D.  Drew lines on the wheels and then measured the angle between the lines.  Worked out to be 13 degrees.  To how much precision?  No idea. There's clearly parallax in the picture so the camera wasn't positioned exactly the same. 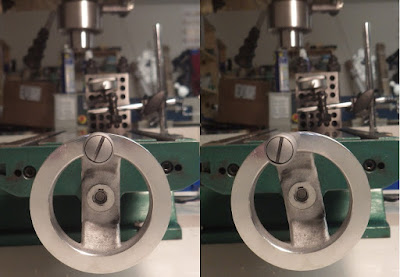 Despite my misgivings at having to take everything apart, I tore down the X axis and spent an hour or so trying to get it so that there was no wasted motion.  I cut my backlash down to .006" on X.

I repeated this as much as I could on Y, but while there's no place to put that handwheel, I could turn the stepper motor with the 1/4" shaft coming out the back of the motor.  This one moved less, and I could adjust Y down to .006 as well.  Strange how they match.

Now I have to confess that I don't really know why zero backlash is pursued so exhaustively while other sources of errors are seemingly ignored.  I'd like it to be a better, but I don't really know what to fix now, and all the CNC controller software includes backlash compensation.  If I spent another week and reduced it to .002, would that really make a difference?  It all depends on what I'm going to be doing, of course, and I can't answer that exactly.

For casual readers, backlash is lost motion in your system.  Many of us have tuned the knob in a radio and noticed the knob slipped backwards when we let go of it.  That's a form of backlash.  When you're running a machine manually, you can watch the dial or Digital Readouts (DROs) or even feel that it's not cutting until you crank out the backlash. Say you have the .006 backlash I have; you watch the DRO and when the machine starts moving, you can see the position changing.  When I encountered my first CNC backlash problem I was trying to engrave text on a cylinder and the machine had to go back and forth along the X axis hundreds of times.  If I recall correctly, I was going to engrave every degree around a cylinder, 360 passes (might have been more).  The effect of losing a few thousandths every cut over 360 passes was for the text to spiral along the long axis of the piece. (360* .006 is 2.16"!)  Once I put backlash compensation in place, it was fine.  I first got the CNC Sherline going because I wanted to carve waxes for lost wax casting.  I carved at least a dozen waxes to make rings out of (not that I ever cast one) with backlash compensation on the Sherline and they always looked fine.

So for this sort of work, backlash was never a problem as long as I used the backlash compensation in the software.  On the other hand, I've heard from guys who are "real machinists" who say that if the backlash on their system gets about .0005", they can see the surface finish get worse.  I was not super critical of surface finish on the waxes I was carving because that step gets followed by more work that changes the surface anyway.

After fighting the backlash, I started going after something that was more of a puzzle than anything.  During the setup of the LinuxCNC system, I had to tell the program some parameters of my system so that it can calculate how many steps it needs to go a required distance.  This could really get down in the weeds, so let me try to give the short version.  It asked for the number of turns per inch on the ballscrews, and a quick inspection said it was around 5 turns per inch (TPI).  Once it was running, when I commanded the system to go an inch, it went much, much farther.  I could scale that number back to make the distance what I commanded, but now the number for TPI was about 1/4 of 5!  In fact, it's 1/4 of the metric pitch, 1.27 TPI.  It turns out there's a property of the motor drivers that can make a screw act that way.  The motor drivers, all four of them, act like they're stuck set to one mode and the switch that's supposed to change it has no effect.

I've been trying to troubleshoot this for a few days, now, and I'm currently waiting to hear back from the hardware supplier I used, Automation Technologies.  This doesn't keep me from doing anything in particular, and it's not a big problem, but it's one of those things that just doesn't work like I think it should.

Finally, I commented in that piece last week that I didn't think I was getting the same rapid movements that Hoss gets on his DVD.  As part of troubleshooting that last problem, I resurrected one of my old Mach3 computers today and got it to run the Griz.  There's no problem with rapid movements.  I can move all three axes reliably at 260 inches per minute.  In most of what I've done on my Sherline, the Z-axis is the holdup because it can only go 15 IPM.  X and Y can go 40 ipm.  Being able to move everything at 260 IPM brings a massive improvement over that system.