Machine Design reports that industrial robot sales set a record high in 2016, but wonders what that bodes for industry.


Industrial robot sales broke a record for the most orders and shipments in 2016, according to The Robotic Industries Association (RIA), but what will this mean for the 1 billion people employed in the manufacturing industry?


But if you want to know how these robots will impact the diminishing industrial job force, read on. And, if you happen to work in the industry, download Uber...because you’re going to need a new job sooner than you can say, “I heart robots for life.”

While the RIA takes a more prosaic approach.


Orders for robots spiked 61 percent in assembly applications and increased 24 percent in spot welding. The food and consumer goods industry increased orders for robots by 32 percent in 2016. Robots in these industries can be used in a variety of functions, including improving food safety, performing repetitive primary packaging tasks such as bin picking, tray loading and bottle handling, and assisting with secondary packaging tasks such as case packing, bundling, bagging and palletizing.

As I pointed out before, and as Machine Design reports, it has long been said that robots are going to replace us all some day; that concept is actually older than the word "robot", which first appeared in the 1920 play "Rossum's Universal Robots", or R.U.R, by the Czech author Karel Capek.  I suspect that the idea we'll all be replaced by machines goes back to the dawn of the industrial revolution, but I've read that the idea of automata as some some sort of servant or slave goes back to early societies before Christ.


Whether we like it or not, using robots to execute repetitive tasks is wildly more efficient than human labor. In one case, the Changying Precision Technology Company replaced 92% of its workforce with automated robots, resulting in a 250% increase in output and an 80% decrease in errors.

Even if quality and output were equal between automated robots and humans (which it is not), robots can save companies gross amounts of money each year on labor alone—one of the most costly business expenses. At the infamous Foxconn factory, automated robots replaced [60,000 workers], cutting its labor expenses by more than half. Other companies, including McDonald’s, have considered following suit as a result.[NOTE: corrected error in original. - SiG]

Remember the name Foxconn?  That's the factory that became "infamous" (as he says) due to workers committing suicide, after working 60 hours weeks without reprieve.  That said, it has also been reported that the suicide rate of Foxconn employees was actually lower than the country's overall suicide rate.  Like many of you, I've worked 60 hour weeks and it is a pretty miserable existence.  On the other hand, 60,000 workers (out of 110,000, or almost 55%) have lost their jobs.  Part of me wonders which group has it worse; the group working 60 hour weeks or the group that has been replaced by robots.

Last December, I published some numbers (coincidentally also from Machine Design) that show the relationship of robot sales to human jobs isn't as straightforward as these examples indicate and as simple as most people think.  Plotted alongside each other, for nearly the last 20 years robot sales go up as employment goes up.  Robots aren't replacing humans, they're augmenting us.

That December piece pointed out that there is a projected skills gap in the coming 10 years, with 3.5 million manufacturing jobs becoming available from 2015 to 2025, and about 2 million of them going unfilled due to a skills gap.  That's almost a 60% shortfall; faced with that, manufacturing companies will have to automate - or die.  The skilled workers aren't being replaced by robots; it's the unskilled workers that look to be the hardest hit.

It's a constant theme around here that world of work is changing, with my belief being that full-time workers will become more unusual while contract and self-employed workers will take their places.  The regulations that the various governmental entities keep putting on employers act as negative incentives to hiring more permanent workers.  For companies like the one I retired from, they're so big that they absorb those personnel and other regulatory costs that small companies can't absorb, but even they wouldn't hire hourly unskilled/low skill workers directly.  New hires were brought in from temp agencies and only given an offer if they looked to be a low risk.  Smaller companies are discouraged from growing big enough to be a threat to the large companies.  What the future holds is hard to predict, but I think Machine Design has a good approach when they say:


It’s very possible the future workforce will be comprised of a patchwork of niche entrepreneurs, artisans, scientists, doctors, and sustenance agriculturalists. If you work in the industrial sector, grab a tractor and a hoe: It’s going to be a bumpy century. 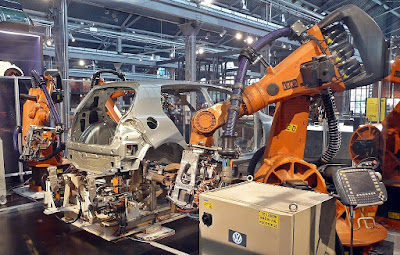 Image Not From the Factories Mentioned Herein (source)