NASA Prepares a Probe to Get Closest to the Sun Ever

I hereby promise not to make the joke that they'll fly at night.

NASA scientists and engineers at Goddard Space Flight Center are preparing a mission to observe the sun from closer than any probe ever flown.  For comparison, Mercury orbits the sun at a distance of 36 million miles.  The new probe, named after solar astronomer Eugene Parker, will navigate a complex series of orbits which all fall inside Mercury's orbit.  The final orbit will be 3.7 million miles above the "surface" of the sun, in the super heated corona.


[NASA is]  putting the finishing touches on the Parker Solar Probe, a 9-ft., 10-in.-tall, 1,350-lb. spacecraft that will take off sometime between July 31 and Aug 19 of next year on a 6.9-year mission to explore the sun.  The probe will be sent on its way atop a second stage mounted on a Delta IV heavy Lifter. It will go into a fairly eccentric elliptical orbit around the sun (see figure below). It will orbit the sun 24 times, and on seven of them will make flybys of Venus to increase its speed and tighten its orbit. The last orbit around the sun will take only 88 days traveling at up to 450,000 mph.

The probe will carry instruments to study magnetic fields, plasma and other energetic particles; it will also image the solar wind, a stream of ionized gases that can blow through the solar system at more than a million mph. The probe’s three major scientific objectives are to: 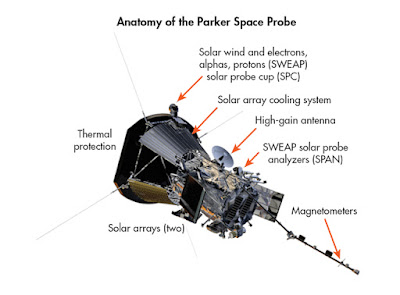 Of course, the danger here is the heat from the sun, so the probe will be positioned to always have its heat shield between the sun and the sensitive instruments.


The primary bulwark against the heat is the Thermal Protection System, an 8-ft.-diameter, 4.5-in.-thick heat shield made of carbon composites that will protect most of the spacecraft’s components from the full brunt of the heat—up to 2,500°F. It is imperative that the probe maneuvers and changes its attitude to keep the TPS between the sun and the probe’s internal components. But the nine-minute lag between when radio messages on position and speed are sent and received at controllers on Earth—and another nine minutes for the adjustments to be radioed back—meant that engineers had to make the Parker as autonomous as possible and able to maneuver on its own to keep the TP correctly positioned. This makes the probe one of the most autonomous spacecraft ever built by NASA.

The 4.5-inch thick carbon composite heat shield isn't enough.  The reality of powering the spacecraft means that it has to deploy solar panels, photovoltaics, to convert the intense sunlight into electrical power.  NASA learned during the Mercury Messenger program how to manage the heat that ultraviolet radiation in sunlight causes in photovoltaics.  The heat eventually degrades the solar cells to unusable output levels.  The Parke probe's solar cells will be mounted to a metallic channel that will have cooling water pumped through it, to reduce the temperature of the cells.


The probe will also use its autonomous capabilities to keep the adjustable solar arrays or wings as shielded as possible, but still exposed enough to generate power when needed. This is critical: NASA estimates that at some times during the probe’s mission, a change of only one degree in the solar arrays’ wing angles would call for a 35% increase in the liquid cooling subsystem’s output.

I find it cool that plain old deionized water is being used on a mission to the sun to keep the solar panels below a temperature of  320F.

The mission has a web page with more interesting background, as does Machine Design.