This is Kinda Cool, But It Also Kinda Creeps Me Out

A couple of weeks ago, the FDA just approved the first medication with an embedded sensor to verify the pill was taken.


This week the FDA approved a new technology geared toward patient compliance in the form of a prescription pill with a digital sensor embedded in it that lets doctors digitally track just how often a patient is taking his or her medication. The sensor was developed by Proteus Digital Health, a technology company centered around developing what it called “digital medicines,” that combine sensor technology and pharmaceuticals to improve patient outcomes.

The system is being introduced in the drug Abilify, and antipsychotic drug.  This is the kind of drug that must be taken regardless of how good the patient feels, and I'm under the impression this might lead to poor compliance.  "They" say that getting patient compliance for people to take their medications is a significant problem for doctors.  This sensor is a simple integrated device that is powered when stomach acid provides the electrolyte to activate a microscopic battery in the pill.  It doesn't really transmit like a miniature radio, it turns the power on and off in a digital signal that's picked up like an EKG will pick up the electrical activity of the heart. The on/off code includes the medication and some


According to a study published in 2015 by Proteus engineers and researchers in IEEE Transactions on Biomedical Engineering, Proteus' sensor, the IEM consists of three layers: an active layer, a 1 mm × 0.3 mm CMOS chip, and an insulation skirt layer, meaning the chip is sandwiched between a layer of magnesium on one side and copper on the other. Thompson reported the IEM silicon wafer as measuring 800 × 300-µm.

After it is swallowed, the sensor comes into contact with the patient's stomach fluid, creating an electrochemical reaction that powers the chip until the electrode materials are fully dissolved. The IEEE study estimated the power at about 1.85 V. Proteus engineers looked at other means for powering the device, such as using electrolyte fluids, however they found the magnesium/copper combination was optimal for biocompatibility (meaning it's safe to ingest), power output, cost, and compatibility with the manufacturing process.

In essence, the sensor is not a mini WIFI, Bluetooth, or radio antenna – it's a detectable power source. The electric signal transmits a binary number that represents the medication and its dosage. The code is stored in the integrated circuit, which modulates the current. The device's insulating skirt shapes the electric field produced by the electrochemical reaction and propagates it through the surrounding tissue, where it can be detected by a skin-worn patch (The MyCite Patch), which records the date and time of the ingestion as well some patient vitals it detects on its own, and can store them on the MyCite's accompanying smartphone app. Using the smartphone app patients can choose who has access to their records, allowing family members and doctors access to check in on them if need be. According to the IEEE study, the electric field emitted by the IEM is similar in nature to ones that occur naturally in the body in the brain, heart, and gastrointestinal tract.

Does it work?  Apparently well enough for the FDA to approve it.  They say the time delay between taking the pill and when it generates a signal isn't well controlled, and sometimes it never generates the signal the pill was taken.


The IEEE study notes that the power and strength of the signal can depend on a number of factors such the amount of food or even other medications in the patient's stomach. According to Proteus it can take anywhere from 30 minutes to two hours after Abilify MyCite is ingested for the patch to record a signal. And the company admits it is possible that a signal won't be picked up at all.

The thing is, if the purpose is to ensure compliance and that patients take their meds, neither the FDA nor Proteus say that it has been demonstrated to do so.  Because of the long and apparently uncontrollable response time, the FDA specifically warns against using it in emergencies or when critical real-time tracking is required.  It seems to me that if the pill is to be taken with meals (or on an empty stomach) and the system can't tell that, it's not very useful.

So what's it good for?  That's the part I can't answer.  It seems to work in the sense of a statistical audit: a random sample to ensure the pills were taken at some point, but it can't tell for sure that Pill #36 was taken on day #36, if that matters.  When it works, it can tell that, but apparently the system working isn't something we can count on.

The the idea of ingesting a pill that can track you raises privacy and ethical concerns, particularly if the technology advances beyond the binary approach (took the pill/didn't take the pill) of the Abilify with MyCite .  The paranoid among us can easily envision being given drugs to modify behavior and the system monitoring us to ensure the pills aren't simply being flushed or dropped in the garbage. As Design News speculates, it's easy to envision a system like the MyCite sensor/patch being integrated with your smart home/Internet of Things That Don't Quite Work Right systems.  Your home would remind you it's time to take your medications and the MyCite would confirm you took them.

The aspect that has always puzzled me is that no one seems to be asking why patients aren't taking their pills and addressing that root cause.  I've heard that an accepted reason is that patients are being given pills that cause memory issues and that's why they forget; if they're off those pills long enough, their memory improves enough to take those pills.  Perhaps they're skipping the drug because it gives them a terrible side effect they'd rather not endure, but they've never told the doctor or the doctor didn't address it to their satisfaction.  While I realize that some percentage of patients get side effects from any drug, there doesn't seem to be a concerted effort to produce drugs that have fewer side effects.  I'm sure designing drugs with fewer side effects is a difficult problem.  So was going to the moon and about a bazillion other engineering problems.  Among the most horrific things I can imagine is being given a drug that's supposed to help some issue and ruins my ability to think along with the intended change. 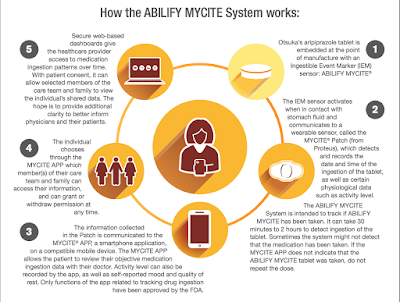 Illustration from Proteus in Design News.  Note that the flow chart says "if the MYCITE APP does not indicate that the ABILIFY/MYCITE tablet was taken, do not repeat the dose."  That's tantamount to saying that the system is useless.  The article concludes with the statement that the drug company is doing a limited roll out of Abilify MyCite. The company said this is a deliberate move to allow it to focus on learning more about patients' experiences with the pill and to allow for ongoing feedback before a larger market release.