While Searching for my Next Engine to Build 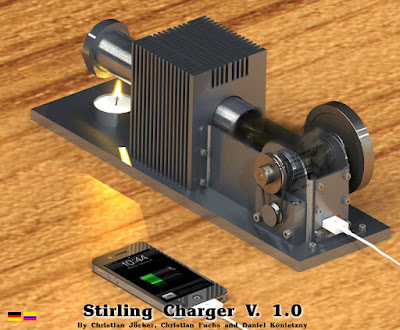 If you haven't already noticed, that's a rendering of a 3D model, not a photo of an engine, and when I went to the original source, Interesting Engineering, it became apparent it's vaporware.  The original rendering and short little article was by a three Mechanical Engineering students who graduated before building this. So no plans and no numbers to understand the problem.

Stirling engines are nothing new, Scottish Clergyman Robert Stirling invented the concept in 1816, and they're very popular among home machinists.  Stirling engines are heat engines that operate by cyclically compressing and expanding air - a good explanation here and a good animation of how they work here.  A well built Stirling engine can turn a good sized fan blade, or spin some sort of flywheel.  There are models which will work on the warmth from your hand.

I can find that a well built Stirling should achieve efficiency around 66%, but what I can't find is how to design it or how big it needs to be (physically) to deliver a desired amount of power.  In this application, you know that USB chargers are typically either 5W or 10W.  In my mind, that tells me if I want the engine to charge things at the 10W level, it needs to be sized to put out more than that.  How much more?  Since there will probably be some inefficiencies in the circuitry, lets say the generating system is 75% efficient, that means the input to the generator needs to be 10/.75 =  13.3W and the input to the engine would need to be 13.3/.66 = 20.2W.  To me, that ought to be how the size of the flywheel and the piston are calculated.

There's a handful of videos that pop up on YouTube of folks using Stirling engines as phone chargers. I don't know that they're honestly 20W charge rates, but some folks are claiming nearly that. Time for a little more research.