I Get a Bad Feeling About This

The Consumer Electronics Show, CES, took place two weeks ago and I have gotten virtually no feedback on it.  I don't know what's up with that, but maybe the newsletters and daily emails I get from the few trade magazines I keep up with now think they're too specialized to do a show like CES.  (The best coverage I got was a few years ago when one of them sent a reporter to the show for the full week and she did a full update every day).

The one thing I do know of doesn't fill me with ... positive, warm fuzzy feelings.  It's about wireless charging of every battery-powered device in the room.  According to the Electronic Design newsletter, Powercast and Energous  demonstrated systems at the show.  In broad brush terms the systems are the same, they use a radio frequency (RF) signal and transmit the power to the wireless device which then takes the received power and turns it into DC to recharge the battery.  Energous shows this conceptual picture of what they call their WattUp system. 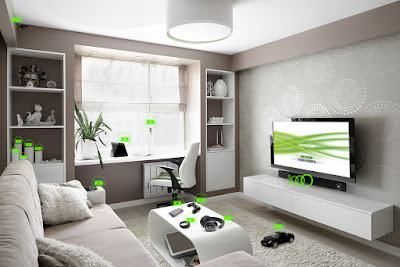 (The WattUp system.  What happens when the cat gets in front of the transmitter?)

Let me be clear: this is not the wireless charging that works by placing your phone on a charging mat or charging station.  As Powercast says:


Behaving like Wi-Fi where enabled devices automatically charge when within range of a transmitter, Powercast’s contactless charging technology provides over-the-air power at a distance to multiple devices – no wires, charging mats or direct line of sight needed. A transmitter sends RF energy to Powercast’s Powerharvester® receiver embedded in a device, which converts it to direct current (DC) to directly power that device or recharge its batteries. Operating across a wide RF power (as low as -17 dBm) and frequency (10MHz to 6GHz) range, the Powerharvester receivers are designed to convert RF to DC with up to 80 percent efficiency.

Let's dissect that for just a moment.  For the simplest possible scenario, and skipping some relevant details, we're talking about a tiny amount of power there.  1 dBm is a power level that is 1dB (10*log of the power ratio) stronger than 1 mW.  -17 dBm works out 20 microwatts; 20 millionths of a watt (converter here, if you'd like).  The familiar USB chargers are typically 5 or 10 Watts.  If your device charged in an hour on that (does any phone?) it would take 500,000 times longer (10/.000020), turning that one hour charge into 57 years.  And this is going to sell?  Reality is that any battery will die before that recharges it, so how is that even reasonable?  And what if there are multiple devices to spread that power over?

Powercast has an FAQ that addresses some of these realities.  They say they're targeting low capacity batteries, like smart watches, and deliver small amounts of power:


Available energy after conversion in the low milliwatt and microwatt range should be expected.

There's another way to think about this that might help set a limit.  What is the maximum power that could be used to charge a device?  That's actually set by radiation safety limits mandated by the Federal Communications Commission in the US and for systems to which the general population is exposed, the FCC limits power in this range are defined in terms of milliwatts per square centimeter.  The limit at their upper frequency (the 5 GHz WiFi band) is 1 mW/sq.cm. while at the lowest frequency they mention (10 MHz), the power limit is 1.8 mW (FCC OET56 4th edition, 1999, appears to be the latest - pdf warning).  Again, skipping over some details, let's assume they can deliver all that 1 thousandth of a watt to one device, and that they can get 1mW/in a 1 sq.cm. antenna.  Compared to the "mythical 1 hour recharge at 20 Watts", this one would take over 20,000 hours to deliver the same amount of charge.  That's still over two years of charging 24/7/365.  And I'm ignoring the 80% efficiency claim, which makes that charge time longer.

Energous' website has a product concept video with the mandatorily-attractive millennial couple enjoying wireless charging of their devices, but they also feature a page talking about having three tiers of product: far field (which I've just dissected), mid field and near field.  If they can meet the power safety limits, perhaps by designing the system to sense the load and shutdown if a hand gets in the way, I can see that near field charging might be more workable.

Systems that a battery operated car would park over and that would charge a multi-hundred kW car battery are left as blog fodder for another day.

Powercast graphic, from Electronic Design.  Note the third and fourth line: 3 W EIRP (Effective Isotropic Radiated Power*) and Charges up to 30 devices.  The source article says it's a 6 dB gain antenna, so the transmit power is really 750mW and each device can see no more than 750/30 or 25 mW and the low gain implies the antenna is radiating a large sector in front of the box, so each square centimeter is going to see less than that.  It seems to be in line with the 1 mW/sq.cm. rule.

The problem I haven't mentioned and the reason I get a bad feeling about this is because there's a segment of the population that believes that being immersed in radio fields is dangerous to their health.  Can you imagine those people wanting to accept this into their world?  How about their workplace?

(* - Effective Isotropic Radiated Power is a combination of the transmit power increased by the antenna gain, which comes from forcing the radio waves in one preferred direction vs. other directions.  Gain compared to a theoretical isotropic antenna that radiates equally well in all directions is used instead of gain compared to a real antenna like a dipole (dBd) because it makes bigger numbers and bigger numbers sell better.  Attempts by antenna makers to define the "gain with respect to a wet banana peel (dBbp)", which gave really big numbers, were never successful because nobody could agree on a standard reference banana peel.)