I've done some experiments with my little "steam" wobbler engine over the course of the last week.  I tried it with three different flywheels.  As always, there's a story behind this, but first, if you're so inclined, here's a four minute video that shows the experiments.


The video is a combination of three separate videos.  The first video is the solid one in that's mounted on the motor in the still photo thumbnail you should be seeing.  That flywheel is actually a remake of the first flywheel, which is the one on the left with the six half-inch holes in it, and I posted when I drilled the holes using my rotary table.  That flywheel was on the engine in the video I posted in that link at the top.  The brass (bronze?) wheel is smaller than the others, 2" diameter instead of 2-1/2".  The weights of the solid aluminum flywheel and that one are within 6 grams of each other, but the important mechanical property is the moment of inertia, and I haven't calculated that.

What's the bottom line?  As of the moment, I like the looks of the lightweighted aluminum best, and the solid aluminum one the least, but the solid aluminum wheel is on the engine for now.  It wobbles more (visible in the first video) and despite that it runs best down to the lowest pressures (12 or 15 PSI).

The engine is "touchy", the tightness of the flywheel is critical.  Right now, there's about .010 gap between the upright and the flywheel and it runs well.  If I adjust that gap so that there's virtually none, the engine won't run. 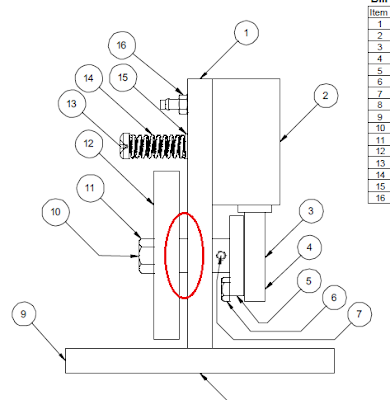 In this view, it looks like they're solidly against each other, and the same with the crank wheel on the other side.  If they're that close, I can't get it to run.

Posted by SiGraybeard at 4:55 PM