About Those Unfunded Municipal Pensions

Congress boldly, courageously and in a fully bipartisan move decided to do something about those $6 Trillion dollars in unfunded pensions - and increase your taxes.  The Sovereign Man kept track of the goings on in Congress and reports for us.

There's an unwritten law about Congress: when they come up with cutesy names for some legislation, like the Patient Protection and Affordable Care Act (better known as Obamacare), the end result never does any of the things in the name.  The cuter the name, the more hideous the legislation.  The USA Patriot Act of 2001 which ravaged personal freedoms and ensured we all get colonoscopies and genital exams before we board a plane is one example.  The USA Freedom act of 2015, which renewed the worst aspects of the Patriot act, and the HIRE Act from 2010, which created some of the most heinous tax rules of the last fifty years are two more.

This month they added another.  The SECURE act is aimed at fixing those pension problems you've read about.


SECURE stands for “Setting Every Community Up for Retirement Enhancement”, which is pretty clever when you think about it.

People want to associate their retirement with a word like ‘secure’. So even without knowing anything about the law, most people will probably have good feelings about it based solely on the name.

That deception is entirely the point.  In reality, SECURE is predictably terrible - it's a massive tax bailout for another poorly funded institution Congress setup.


Pension plans in the United States are currently guaranteed by a quasi-government agency called the Pension Benefit Guarantee Corporation.

The PBGC is sort of like an FDIC for pension funds… so that if a pension plan goes bust, the PBGC will step in with a bailout.

Problem is, the PBGC itself is nearly insolvent and will run out of money in 2025. And its balance sheet is trivial compared to the multi-trillion dollar pension problem.

So Congress came up with a solution: go into DEBT!

Debt is the answer to EVERYTHING!  According to the SECURE act, whenever a pension plan runs out of funds, Congress wants them to borrow money in order to keep making payments to beneficiaries.  This raises an obvious question: who would be insane enough to loan money to an insolvent pension fund?  You are!  Well, your exalted members of Congress have courageously volunteered you for the task, putting the American taxpayer on the hook for this potential $6 trillion liability.

Hasn't everyone always told you the American public in conservative red states would pay for the idiotic promises of Illinois, New York, and the other states largely responsible for the pension crisis?  Looks like the pessimists were right.

That's not all the SECURE act does.  Did you plan for your retirement and put aside a good 401k plan?  Under current law, you could leave your IRA to your children in a fairly tax efficient way - they can take the rest of their lives to withdraw it all. That’s actually one of the nice things about an IRA.  The SECURE act shortens that to ten years.  Of course, this hits the middle class the hardest because it's a bigger percentage of their total assets than it is for wealthy taxpayers.

The Ways and Means Committee provides a helpful summary of the bill.  (Or, read the full text of the bill.)   Forbes contributor Elizabeth Bauer takes a good look at the bill here.

The SECURE act passed the House with bipartisan support and is now in the Senate, where it will likely be combined with/modified by a bill with similar intentions, the Retirement Enhancement and Savings Act (RESA), S. 972.  Senate Finance Committee Chairman Chuck Grassley, R-Iowa, has said that passage of RESA “remains a top priority,” so I have to think the chances are pretty good something like the Secure act will pass.

The bill has positives that I haven't gotten into, like raising the age at which mandatory withdrawals from a 401k have to begin, making it easier for small companies to create 401k plans, and more.  Fundamentally, it's a  mix of incremental improvements in 401(k) plans plus miscellaneous special interest provisions. 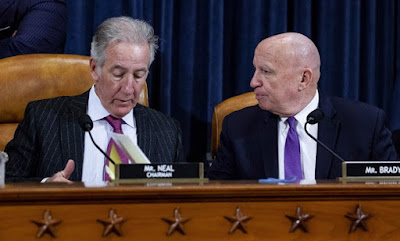