Where To in Space?

Apollo 11's 50th anniversary was a one day celebration of the media, although the mission goes on for another few days (and can be followed in real time here) and then it has gone back to being a history book story.  On to the next outrage of the day or whatever political story is grabbing headlines.  So what now?

Slight detour first.  One of the things I don't understand at all is the lunar landing deniers; it's such a stupid thing to wrap one's belief system up in.  I understand that with big conspiracy theories like this, there's simply no way to disprove them.  There's no piece of evidence we could show a true believer that would have them say, "Gosh! You're right!  We did go!" For the last 30 years, I believe it has polled consistently that 6% of the population believes we never went.  There's another group who just claims they're not sure.

When I worked for Major Southeast Defense Contractor, there was a graybeard Mechanical Engineer whom I became friends with.  His first job out of college was with Grumman Aerospace doing support for the Lunar Modules.  He talked about being called into a Tiger Team to solve an issue on Apollo 14 because one of the astronauts had tripped over a cable, pulling it out of one of the science packages.  For some of you, if I say Mil-38999 connectors, you'll get a visceral nausea at the thought of rewiring and crimping the pins on one of them.  In 1/6 G wearing gloves with fingers as wide as small Caribbean islands.  They told the crew to abandon it.  This week, sources have been saying over 400,000 in 20,000 companies worked on the Apollo program.  He was one.

There's so much evidence that a landing denier has to make it a life goal to not see it and truly examine it.  Fast Company magazine (of all places) ran a story back on July 13 with just a few of the reasons why it's such a silly idea.  He starts out philosophically, by asking how do we know anything?  To borrow a few sentences:


It’s a little like asking how we know there was a Revolutionary War. Where’s the evidence? Maybe it’s just made up by the current government to force us to think about America in a particular way.

How do we know there was a Titanic that sank?

And by the way, when I go to the battlefields at Gettysburg—or at Normandy, for that matter—they don’t look much like battlefields to me. Can you prove we fought a Civil War? World War II?

The thing to remember about the space race was that it was a race.  Remember there was a Soviet Union, who entered the 60s well in front of the US space efforts, and who had the capability to monitor things on the moon as well as we could.  If they had any indications that the missions to the moon were faked, don't they think the Soviets would have made it known?  They would have pounced on and revealed any fraud in the blink of an eye, and not just without hesitation, but with great joy and satisfaction.


In fact, the Russians did just the opposite. The Soviet Union was one of the few places on Earth (along with China and North Korea) where ordinary people couldn’t watch the landing of Apollo 11 and the Moon walk in real time. It was real enough for the Russians that they didn’t let their own people see it.

Books could be written on why the Soviets didn't make it to the moon; the story I think has the most weight (and I haven't been able to find it lately) is that some of the brightest minds in their space program were killed in a pad disaster that took out the launch structures and those scientists/engineers.  They never recovered from that loss, but they continued the race.  Not everyone recalls that at the time 11's LM landed on the moon, there was a Soviet probe on the surface (Luna 15) - a mission that was supposed to show the world "we can return moon rocks to earth for study without sending humans".  The mission failed.

With the latest generation of satellites prospecting the moon, we can see the landers and marks on the surface.  These are from later missions, but can we assume that if they faked 11 they would have faked them all? 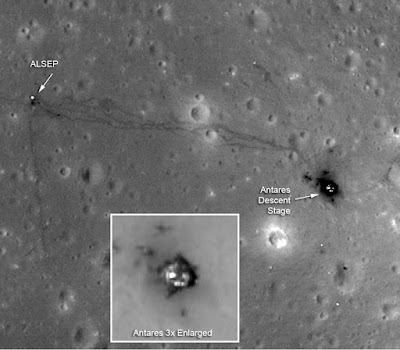 Of all the arguments that we regularly read from lunar landing deniers, one has an element of truth to it.  They say the Van Allen radiation belts would have fried the astronauts.  That's wrong by orders of magnitude, but there is a measurable effect.  It turns out the astronauts who went through the belts to the moon had a significantly higher rate of cardiovascular disease than astronauts who never went to orbit or those who only went to low earth orbit.

The looming issue here is that they can't conclusively say it was the Van Allen belts, just that it was something to do with leaving Earth's protective magnetosphere, but they only left the magnetosphere briefly; Apollo 11 was four to five days (I'm guessing here) but other missions were longer.   That brings more concern to a Mars mission, as well as doing work on the moon.

With current technology mission plans, called "boost and coast", a Martian trip is a long undertaking.  Mars and Earth reach opposition (closest point) roughly every two years (it varies).  Launched around then a trip to mars then takes about seven months.  After that, as Earth continues to advance ahead of Mars, the return trip takes longer.  A quick stay on Mars turns into seven months there and ten months to a year coming back.  If one is going to travel for 18 months, a year and a half, it makes a reasonable argument to stay longer.  Seven months to Mars, then explore 16 months until Earth is approaching for the return trip to get shorter?

A potential solution is nuclear powered spacecraft.  I've been talking about this for years, but a nuclear powered engine can accelerate half the way there and decelerate half the way.  There are designs for engines that "burn" low yield atomic explosions - impulse power - for thrust.  Some designs that have been investigated would allow 60 day trips to Mars instead of seven months.  By now everyone has heard of bone loss, edema and other problems astronauts on the ISS face.  Those can be solved by artificial gravity on the spacecraft, like the science fiction books used to say.  Yes, it will make the spacecraft heavier and the mission more expensive.   Nobody ever suggested there was anything remotely easy about it.  Are you in Elon?