Well That Got Ugly In a Hurry

In the space of a few hours, Dorian went from being forecast to be overhead at 2PM on Sunday as a tropical storm to being a Major Hurricane a little north of here and making landfall Sunday night.  Right now, they're forecasting it as a major hurricane, which means category 3 or above, passing overhead early on Labor Day.  Some of the models have it reaching category 4.

So far the models have gotten a lot wrong.  Here's yesterday's 5PM Atlantic Standard Time forecast.  The red line is where I drew in the actual path (as I can tell from Puerto Rico's NOAA weather radar).  The forecast was to pass over the SW corner of PR; in real life it went to the NE of the island and never made landfall - out of the white cone of uncertainty.  Epic fail.  Which is not what you want to see when you're planning your life based on their predictions. 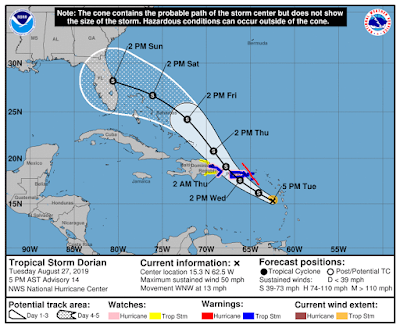 We're still in the stippled area at five days and if it's not accurate one day in advance, five days is pretty hopeless.  The progression of uncertainty is ordinarily quoted at 100 miles per day, so that by five days, the total is 500 miles.  Which is pretty much what the map shows.  From the upper keys to South Georgia is in the uncertainty area.

For contrast, here's the 8PM update of that prediction, just posted moments ago. 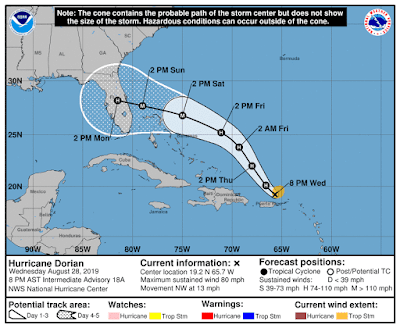 You'll notice no real difference in where it crosses the coast, just the symbol going from S for tropical storm to M for major hurricane.  The models are updated two or three times a day, depending on who's running the models.  Many update at midnight and noon UTC, which correspond to 7PM and 7AM.  The trend in the models has been drifting south, and if that continues, we could be off the hook, but the official forecast isn't showing it.

We're essentially ready to put up shutters and prepare, but we'll be watching the updates until it's apparent we need to do that, Saturday afternoon or Sunday morning.  I think I've spent a couple of years of my life watching storms like this and trying to see what they're going to do.

Let me close with a meme that I stole from Miguel down at Gun Free Zone, because it's truth. 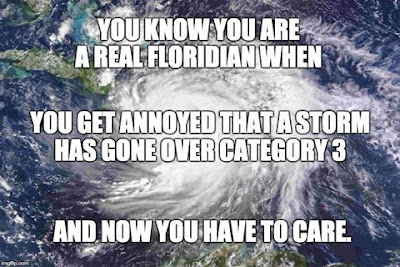