"Why Do We Still Have This (Mass Shooting) Problem?"

That was among the first things I heard after the El Paso mass murder.  I didn't write down who said it, whether it was politician or someone who isn't a megalomaniac (which pretty much all the politicians are).

It started within minutes.  You heard it - punish gun owners, punish the NRA, punish everyone except the murderers.  Meanwhile the leftist, environmentalist, whack job who wanted his diatribe read on the news gets it read on the news.  So they change a few words here and there to blame Trump for motivating him, why should he care?

What's so hard to understand?  There's on the order of 75 million gun owners in America with 800 million guns.  One murderer broke at least a dozen laws to kill people because the planet is overcrowded.  He said plain as day (though not in these words) that he wanted to play the role of Thanos from the Marvel Avengers movies - there are too many people in America so he needed to kill lots of them off.

You get more of what you reward and less of what you punish.  The people who commit the mass murder, and the aspiring mass murderers out there get incentivized to do more killing.  That leads to more mass killings, but the people being punished didn't do anything wrong to start with so there's nothing to get less of.

What's so hard to understand?  Killers prefer gun free zones.  They prefer to have the longest time possible to rack up the most kills.  If they really want to stop the killers, we need to eliminate their killing fields.

In fact, if they really want to get rid of the mass killings they need to do the exact opposite of what they're talking about and the exact opposite of what they've been doing for at least 50 years.  They need 50 state constitutional carry, an end to free fire (gun free) zones, and more armed citizens.  In both cases this weekend, the police did a stellar job of response, but the first person to see and hear the shooter is always already there when the shooting starts.  The Dayton police got that shooter within 24 seconds, but what if someone in the crowd - or five, ten or twenty someones - got a good shot off in half that time? 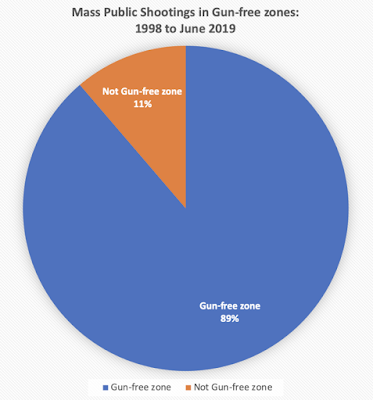 Very simply, if they keep rewarding the guilty and punishing the innocent, they're never going to end mass killings.  There is simply no solution they can legislate to stop this.  The people they're passing the laws against are not the ones committing the crimes.