Are Solar Cars At the Tipping Point of Mass Adoption?

That's the view of Raghu Das, CEO of market research firm IDTechEx, who has been studying electric vehicles.  The reason is that for some percentage of drivers, their EV may be able to recharge without plugging into the grid.  This was an article originally published in eeNews Automotive  and reprinted in Electronic Design.


Startups Sono Motors and Lightyear announced solar family cars available as of next year. They have solar bodies rather than the useless scrap of solar roof seen on other cars.

Take the Lightyear One.  The entire body will have integrated solar cells, not just a panel on the roof.  Because of this, they claim “In extreme conditions (in winter, at highway speeds and with heating on) we guarantee at least 400 km (248 mi).”  In optimum conditions, they claim a range of at least 725 km.  The article contradicts this a little, saying it can go 740 km:


They do not have the acceleration of a Tesla, but Lightyear cheekily points out that its Lightyear One will go 740 km faster than any Tesla because the Tesla would have to stop and plug in. 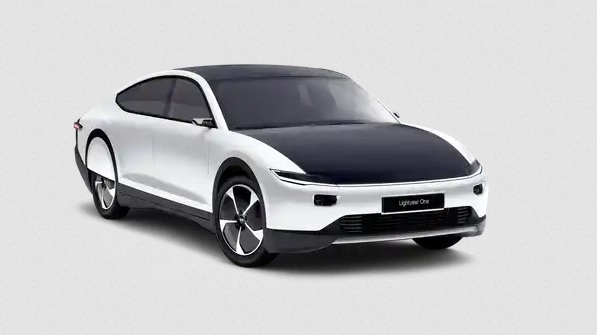 When I see a claim like this, I automatically do the mental calculation.  The maximum solar energy available to charge a car is about 300 Watts per square yard, when you consider the efficiency of solar cells.  That would require a flat panel positioned optimally; that is, always tracking and perpendicular to the sun's rays.  For a rounded, streamlined surface like this car's, the amount it can recover won't be that large.  According to IDTechEx, they expect cars to get about 1 kW.  That seems reasonable.  They go on to say:


“We are clearly at the tipping point for adoption of solar on land, water and air vehicles, particularly on pure electric ones where range sells. There are now camper vans, delivery trucks, robot shuttles, buses, boats and even aircraft getting at least 10% and often all of their electricity from daylight. Many find it useful even on the sides of their vehicles. Any designer of any electric vehicle must now seriously consider solar bodywork. It is a new key enabling technology”, says Das.

They're considering a typical commuter car that might do 30 miles in a day (reported to be the American average).  The car might be capable of two hundred miles (or more) in a day, and 10% of that would be 20 miles.  Cars like that might well be at the tipping point of getting enough energy to run for a day by sitting and charging in a parking lot all day while the owner is at work. They're still not a car to take on a road trip, or to spend all weekend driving while going shopping, or other things people typically consider when they buy a car.