Heinlein's TANSTAAFL is often stated as being roughly equivalent to the second law of thermodynamics.  You can't get something for nothing.  No perpetual motion machines.  In The Moon is a Harsh Mistress, where Heinlein first used this phrase, the protagonist talks about the free lunch in a bar and tells another character to consider hidden costs.  Where I'm going with this is for you, gentle readers, to recognize that everything that our leaders think they're doing with their management or government policies has a cost and if they care at all about whether they're doing more harm than good, they should analyze all of the costs and do a Cost Benefit Analysis.  Often, perhaps usually, many of those costs are hidden or unknown unknowns.

When they decide that we're going to put the country into shutdown to keep from overwhelming the medical system, they're fooling themselves if they think there are no other costs to putting millions of people out of work.  Further, if the only thing they're tracking is the number of people taking up beds in Intensive Care Units, they're lying to themselves about the epidemic by tracking one cost and ignoring scores of others.  Not only is the medical system not overwhelmed, they're literally laying off, furloughing and otherwise shedding thousands of workers because millions of the so-called elective surgeries aren't getting done.  How many people have had a cancer diagnosis but had their treatment halted because they couldn't get the tumor removed or some other elective procedure?  How many of those people will die because of the delay?  We know by comparing American survival stats to those of the British NHS with its ordinarily much longer waits for that sort of procedure that there will more cancer deaths than usual in the US and our survival rates will look more like theirs.

Dr. Nicole Saphier, a radiologist from Memorial Sloan Kettering Cancer Center and a medical analyst on Fox News put some example numbers out in a tweet recently, picked up at 90 Miles From Tyranny: 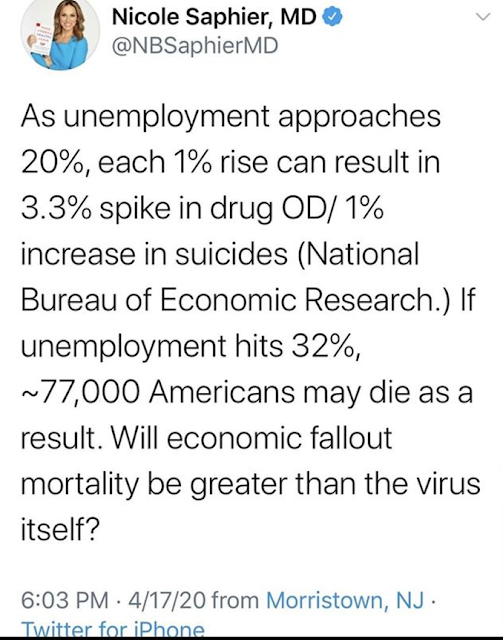 Considering how bad every other set of numbers that's been tossed around has been, I'm skeptical of this, too, but it's better than estimating how many cases of an illness we haven't had.

No policy, no law can save lives.  All that a policy can do is trade one group of lives for another.


Good policies result in a net positive tradeoff. But we have no idea whether the tradeoff is a net positive until we take a sober look at the cost of saving lives. And we can’t do that until we stop with the “if it saves just one life” nonsense.