In a move I hadn't heard of, Space News reported Monday that when the Air Force selected their two main launch services providers for the next five years, they stopped a previous contract that Blue Origin had won in 2018.  Blue Origin is protesting that call.


The Air Force in August selected United Launch Alliance and SpaceX as its launch providers for the next five years. Blue Origin competed for the job but lost and, as a result, the Air Force plans to terminate a $500 million contract Blue Origin received in 2018 to advance the development of its New Glenn rocket.

The company is moving forward with New Glenn with the goal to debut the vehicle in 2021 and pursue commercial work, but it is trying to make the case to the Air Force that it should continue to fund the vehicle and the ground infrastructure that it would need to be certified for national security missions.

The Air Force chose ULA and SpaceX over Northrup Grumman and Blue Origin.  Back in August, Assistant Secretary of the Air Force for Acquisition Will Roper said that the service planned to terminate the LSAs with Blue Origin and Northrop Grumman (LSA = Launch Services Agreement), explaining that the Air Force didn't have the money to continue funding those agreements.  Naturally, the Air Force started to prepare for legal challenges, which seems to be the norm.


The purpose of the agreements was to help Phase 2 competitors pay for launch vehicle development and infrastructure. Blue Origin received $500 million; Northrop Grumman $792 million and ULA $967 million. The funds were to be spread out through 2024, and the Air Force from the beginning said the LSAs would be terminated with those companies that did not win a Phase 2 procurement contract.

Blue Origin argues that they should be funded in the interest of national security. Megan Mitchell, Blue Origin’s director of government and legislative affairs, told SpaceNews.

Development of the New Glenn will continue.  Blue Origin has lined up paying customers for satellite deliveries to orbit, but this is undoubtedly a setback for the company.  They also have paying customers (United Launch Alliance) for their BE-4 methane/LOX engines.  It has always struck me as an interesting rocket.  It was going to be (still may become) the first reusable, orbital class rocket powered by methane-oxygen engines, and in the size class of the Saturn V. 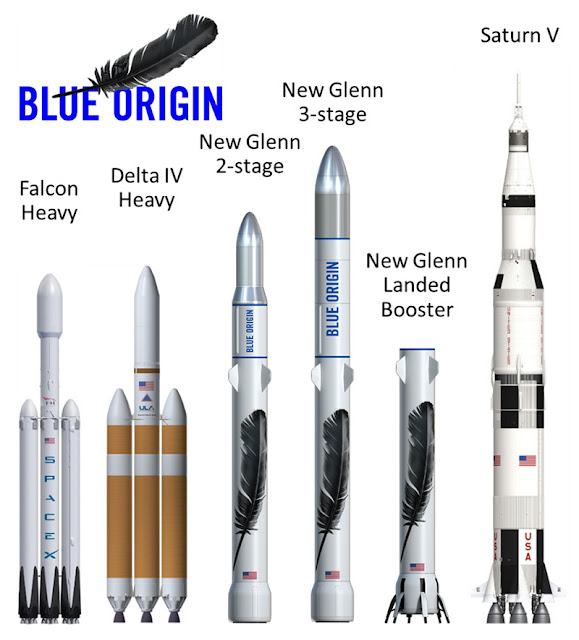