Two stories have emerged in the last few days.  One just stupid, the other ominously stupid.  The simply stupid one first

You may have seen this story at Western Rifle Shooters; Ireland, a country of about 5 million people, has gone to a severe lockdown system where people are forbidden to go more than 5 km, or 3 miles, from their homes.

Irish biochemist and podcaster, Ivor Cummins shows data that during the worst of epidemic in Ireland, the death rate was approximately one person per million per week.  A total of 1,852 people are listed as fatalities of the virus, but as Ivor points out in the video, during the worst of the epidemic, when fatalities were rising almost vertically on the graph he shows, 95% of the people diagnosed with Covid were not given treatment (!) because they were considered too ill or weak for ICU treatment, and left to die (it's a Nationalized Health System there; they let people die all the time).  The 5% remnant that was treated represents 93 deaths, or just over 13 weeks at 1 death per million.  The situation isn't that bad now.  The current ICU population is around 7 people in ICU per million population.

Why? This video from Ivor last week has the same question but outlines what seems to be the plans for the new lockdown.


The other case, as I said, is more ominous.  This story broke a couple of days ago and was picked up by Breitbart, linked from Watts Up With That.  Dr. Michael Levitt, winner of the 2013 Nobel Prize for Chemistry was cancelled from a biodesign conference, a specialty he practically founded, because of things he as published about Covid-19.  Read that again: the conference had nothing to do Covid-19, he was cancelled because conference organizers had received ‘too many calls’ from other speakers ‘threatening to quit’ because of his views on Chinese coronavirus. He has long maintained that the threat is overblown and that ‘we’re going to be fine.’


Professor Levitt – Professor of Structural Biology at the Stanford School of Medicine – was one of the earliest critics of what he sees as the worldwide overreaction to Chinese coronavirus. He describes the extreme measures taken by many governments to control it as ‘another foul-up on the part of the baby boomers.’

He told the Unherd podcast:


I am a real baby boomer – I was born in 1947, I am almost 73 years old – but I think we’ve really screwed up…We’ve left your generation with a real mess in order to save a relatively small number of very old people.


Though his position has earned him many enemies within the scientific establishment,  his predictions of the disease’s trajectory have proved a lot more accurate than the scaremongering models of alarmists like Neil Ferguson.

Dr. Levitt put it this way in his Twitter statement: 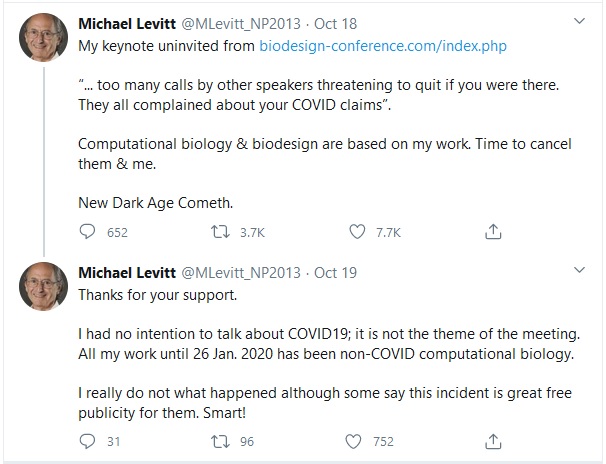 His thought crime was to observe that in outbreak after outbreak of this disease, a similar mathematical pattern is observable regardless of government interventions. After around a two week exponential growth of cases (and, subsequently, deaths) some kind of break kicks in, and growth starts slowing down. The curve quickly becomes “sub-exponential.”  Pretty much everyone who has analyzed the numbers has seen this pattern, and  - Newsflash! - it's so common among viruses that it has a name, the Gompertz curve.  I know I've written about this before, referencing an article from April.


This may seem like a technical distinction, but its implications are profound. The ‘unmitigated’ scenarios modelled by (among others) Imperial College, and which tilted governments across the world into drastic action, relied on a presumption of continued exponential growth — that with a consistent R number of significantly above 1 and a consistent death rate, very quickly the majority of the population would be infected and huge numbers of deaths would be recorded. But Professor Levitt’s point is that that hasn’t actually happened anywhere, even in countries that have been relatively lax in their responses.

Now practitioners in the field of Computational Biology and Biodesign are rejecting the father of the field because he points out a simple truth that anyone who can do computations should be able to recognize.   And yet these people call themselves scientists.