Where "small" modifies update, not shop.
Not much has happened with my little Webster ICE (internal combustion engine) since my last update two weeks ago, not because of lack of trying, just lack of success.  One part I made has been giving me fits.  This one; a counterweight design I copied from the web without details and apparently didn't make properly. 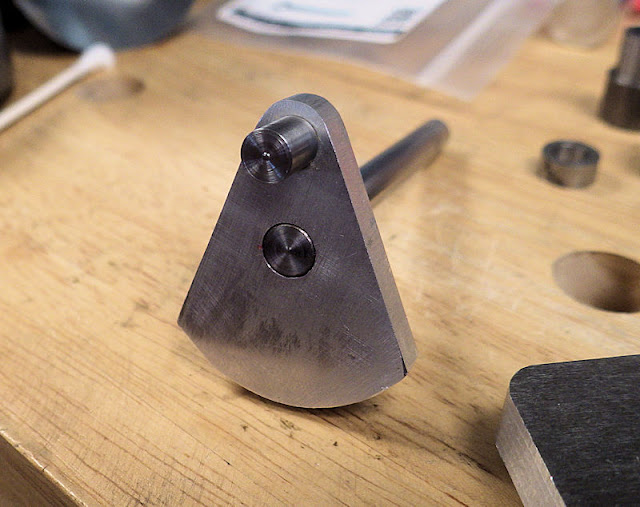 The sizes aren't very obvious - you can see by the out of focus Q-Tip on the left that it's not an enormous part.  From the center of the radiused curve at the top to the bottom of the bottom radius, it's 1.82".
There are two shafts visible.  Both of them are 5/16" drill rod;  0.3215".  The problem is with that lower shaft protruding behind the part, there's too much of a gap between the shaft and plate it goes through.  That's a quarter inch thick aluminum plate.  It's too loose a fit (meaning I made the hole too big) and Red LocTite has broken twice - the latest time today.  I need that part to fit where it goes to determine the thickness of some spacers I need to make that will go on the shaft (it's the crankshaft - that short one facing you at the top drives the piston).
With the shaft out of there, I compared the hole to a reamer I have that's .001 oversized.  The oversized reamer drops through the hole without touching it, and calipers (which are not the way one really measures a hole) say it's closer to 0.317 which is insanely out of spec.  I have to think I just used a drill bit.  That's just plain not good thinking on my part.  One of the things that has slowed me down is waiting for LocTite to cure on this part.
I should probably just remake the part.  It was cut on the CNC mill and I'm sure I have the file somewhere, or can re-create one.  Since I've tried LocTite twice, I don't think that's going to work for me.  I've read many places that a good alternative is to knurl the part, which forces some metal up around the cuts it makes.  I don't know if that's going to be enough to get it to fit, but it's going to be better than what I have.
My only success has been making an adapter from the RC engine carburetor to the intake port on the engine.  This part works acceptably well. 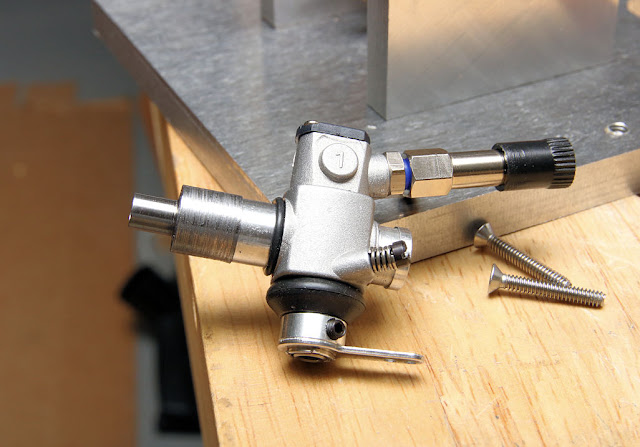