After a couple of weeks with very little going on, a lot has come up in the last couple of days.  In no particular order:
Firefly Aerospace said its Alpha rocket first stage completed its final acceptance test on Friday, Oct. 9, at its test facility in Briggs, Texas. In a (rather impressive) video posted online, the test appeared to last for a bit less than 20 seconds.  Back in March , we did a piece that said they hoped for an operational launch by this past summer.  Clearly, we're well past summer, and while the Alpha rocket is headed for Vandenburg AFB to prepare for flight, they have a lot to do in the remaining ~76 days of 2020.  The video is 1 minute long and shows three different views of the roughly 20 second burn.


Remember the "self-eating" autophage rocket reported on back in 2018?  This week's Rocket Report from Ars Technica reports that the United Kingdom's Defense and Security Accelerator has pledged nearly $120,000 to further development of a novel "autophage" rocket. The project, under development at the University of Glasgow, burns its own structure as propellant during its ascent to orbit.

Autophage engines have already been test-fired by the Glasgow team using all-solid propellant. The new funding will underwrite the research required to use a more energetic hybrid propellant: a solid tube of fuel containing a liquid oxidiser. The engine will be test-fired at Kingston University in London’s new rocket laboratory in London next year.

One of the most interesting things that's happened to me in the 10 years of this blog is that the principal investigator on the engines, Dr. Patrick Harkness of the University of Glasgow, stumbled across the posting I put up and contributed to the discussion.

Yesterday, NASA awarded contracts to four companies for studies related to in-space refueling.  In an August 2019 post, we covered the beginning of work between NASA and SpaceX on refueling.  This extends that and adds other companies to the program.  What follows is an excerpt from that NASA web page, and doesn't include another family of awards for Lunar Surface Technology Demonstrations.  The total announced yesterday was $370 million.
It has been reported that this might represent the first funding NASA has ever given to SpaceX for the Starship vehicles.


Speaking of SpaceX and the Starship development, as anticipated on Sunday, all three raptor engines have been mounted on prototype SN8, and testing began during the overnight hours last night.  Testing will resume with a road closure at 9:00 PM CDT until 6:00 AM tomorrow, followed immediately by closure tomorrow, the 16th, from 8:00 AM to 4:30 PM CDT. Anticipation is running high that a Wet Dress Rehearsal (WDR) will be conducted tonight followed by a static firing test tomorrow.
A WDR is a test in which the fuel is loaded, turbopumps are spun up, preburners may be lit, but the raptor engine is NOT ignited.  A road closure & FAA TFR (overflight restriction) are required, and the fuel load is reported to the FAA.  The same requirements apply to the static engine firing.  As we learned with the previous prototypes (SN5 and 6), a static firing will last for around 4 to 5 seconds.  It still doesn't seem too optimistic to believe the 50,000 foot hop might happen by Halloween. 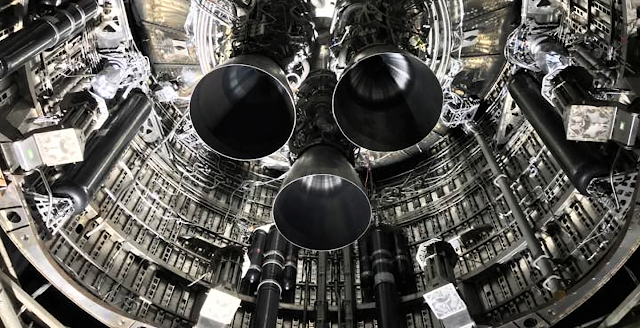 An "up the skirt" photo of SN8 and the three raptor engines.  SpaceX photo tweeted by Elon Musk.
Locally - and noteworthy - the next Starlink launch is scheduled for Sunday morning at 8:27 EDT, and a second Starlink mission is scheduled for Wednesday at 12:36 PM.  Teslarati notes this will bring some milestones with it.

Regardless of the schedule uncertainty and potential for delays, if SpaceX manages to successful launch Starlink-13 and Starlink-14 within the next two or so weeks, October will mark the first time the company has launched three Starlink missions in one month. If the missions weren’t for Starlink, SpaceX would effectively be creating the second largest commercial satellite constellation in the world in less than 30 days.

Additionally, NextSpaceflight.com reports that SpaceX has assigned Falcon 9 booster B1060 to Starlink-14. If Starlink-14 lifts off on schedule on October 21st, B1060 will beat out B1058 for the crown of fastest booster turnaround, launching twice in just 48 days. Falcon 9 B1058 set the current world record when it beat NASA’s Space Shuttle (54 days) with a 51-day turnaround earlier this year.

The reference to "potential for delays" relates back the Delta IV Heavy launch for NROL, which has been scrubbed numerous times since its initial launch date back last June.  It's currently scheduled for October 23rd  (next Friday) at 10:00 PM.