The First Starship Gets Its First Sunrise

And it's a beautiful thing.  Sunrise this morning at Boca Chica, Texas, screen cap from Lab Padre feed. 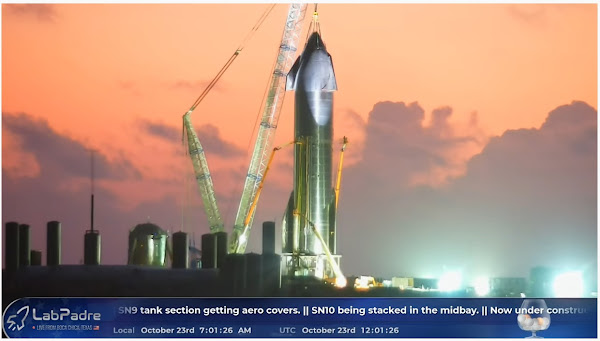 The nose cone section was stacked last night around sunset and work proceeded on it all night.  This is the first time anyone has seen the full-sized Starship, approximately 50m (165') tall,  and a bit less than half the size of the final Starship and Super Heavy booster, a combination originally called Big Falcon Rocket (BFR).  People who talk far more than I do on the Lab Padre video refer to this as the opportunity to watch history being made, and it really is.  One step at a time, at a pace which sometimes feels glacial, but is like shooting Class VI rapids compared to everybody else.

Pic credit at the bottom; NomaddNSF.

I've run across a rather geeky and interesting space blogger named Casey Handmer, who is far beyond my meager math models in the things I've read.  He has a long but very technically astute post about Starship called "The SpaceX Starship is a very big deal" and if you're interested in what the buzz about this BFR is all about, it's a must read.


Starship is the upper stage vehicle. It has a dry mass of 200 T, a fuel/ox mass of 1200 T, and a nominal payload of 150 T. Combined with high performance methane-oxygen vacuum engines, Starship is capable of over 7 km/s of Δv, which is very important.

Starship is boosted for Earth launch by Super Heavy, which is capable of lifting Starship to about 4 km/s before returning to the launch pad.

Both stages are designed to be fully reusable, enabling both high reliability and very cheap launch cost. Indeed, the marginal cost per flight could fall to $5m or below, reducing launch costs to the neighborhood of $35/kg, or 1000x less than Shuttle.  [Bold added - SiG]

After he gets several important expense and business concepts out of the way, he comes to the meat of the article:


With the money question out of the way, we can ask ourselves: What is Starship for? SpaceX could make plenty of money with incremental improvements on the Falcon launchers, and even build up Starlink without Starship.

Starship is for building nations in space. I don’t mean Project Artemis or some version of “The Martian,” though Starship could easily do both. I mean serious logistics.
....
In 10 years, Starship flights will be sold by the dozen. Starship is only cheap if it gets used as much as possible. The only meaningful barrier to production today is engine manufacture, and that will be through the hardest part of the learning curve well before commercial flights begin.

In the remainder of the article, he concludes that while Starship is gigantic by current standards, current planning numbers are to expect 120 meters, (394 feet) tall, it's about the minimum size for a vehicle to land on Mars as intended.  It's small for a vehicle that will turn virtually every aspect of spaceflight upside down.

It is so bold and brash a goal that a first impression is that it's too bold. Can't be done. The fact that it is being entirely funded by the commercial operations of SpaceX makes it all the easier to watch with amazement as the world changes.  As we watch, read postings and tweets, we see them methodically taking on the challenges and working through the issues.  Enough to dramatically reduce doubt they'll ever make it.

Meanwhile, Elon Musk tweeted, "SN8 Starship with flaps & nosecone should be done in about a week. Then static fire, checkouts, static fire, fly to 60,000 ft & back." I've been saying it could take that big hop by the end of the month.  Since that's next weekend, I'll go with the majority and say that since this is the first time anyone has ever worked on the complete Starship, that 60,000 ft hop will take longer to get to.  Expect it to be the second half of November.