Well, maybe not now now, but the time is soon.  Next week for sure.

The time for what? If you want to pay any attention to political polls - and I sure hope you haven't paid a minute's worth of attention to them so far - the time when they start to mean something is coming.  Why?  Like all of the mass media news, polls can do one of two things: they can tell a narrative or they can tell the truth.  Since about the start of the primary season last year, polls have been used to set up a narrative.
Now, however, a new narrative is starting, one vastly more important to the pollsters than their descriptive narratives of how the election will be.  This narrative is "who will predict the results the closest?"  This narrative allows the company that got the closest to raise their rates they charge others who want to use their services.

As you know, the big campaigns hire their own full time pollsters.  That's how Kellyanne Conway ended up running Trump's campaign and working in the White House.  She ran a polling company, called (imaginatively enough) The Polling Company, and predicted better than the others along the way.  For lower profile (and lower budget) campaigns, they can either hire pollsters or just read them in the paper like we do.  Being right is marketable.
I haven't thought much about it or paid much attention to it.  It's a pretty safe bet that a standing president will get elected; in the last 100 years, only four presidents have not been reelected with the last being George H.W. Bush in 1992.  Before that it was Jimmy Carter and Gerald Ford in the 1970s, and then you have to go back to  Herbert Hoover in 1932.  A president has to be pretty widely disapproved of to not be re-elected and based on rallies and signs of enthusiasm I see, I don't see that sort of disapproval of Trump.  Certainly the far left disapproves of him, but I'm not convinced the narrative we get everyday about widespread dislike reflects reality.


While researching my previous writings to see if I'd addressed this before, I stumbled across a fun post from almost exactly this day in 2016.  There's a college called Chapman University in California that does an annual poll on the greatest fears people have.  I found it interesting that the highest percentage of fears was of corrupt government officials.  There were some smart people back in 2016! 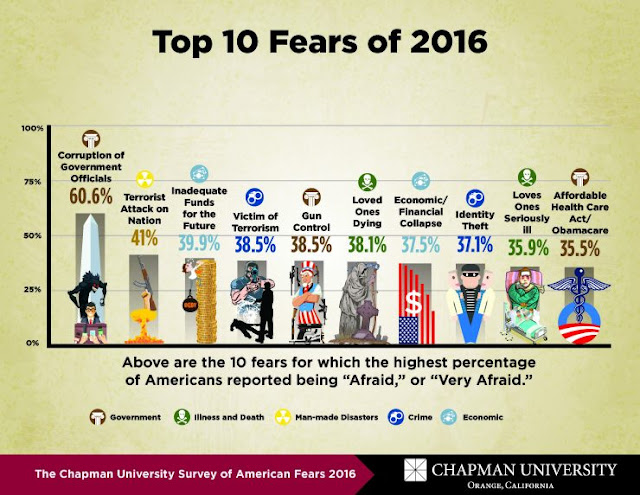 Since the survey was in my post from October, and it's October now, I naturally wondered if Chapman had the 2020 survey posted.  They didn't; the most recent was the 2019 survey.  The '19 survey just isn't prettied up like the '16 survey was, but I present the 10 biggest fears of which people said they're either "afraid" or "very afraid." 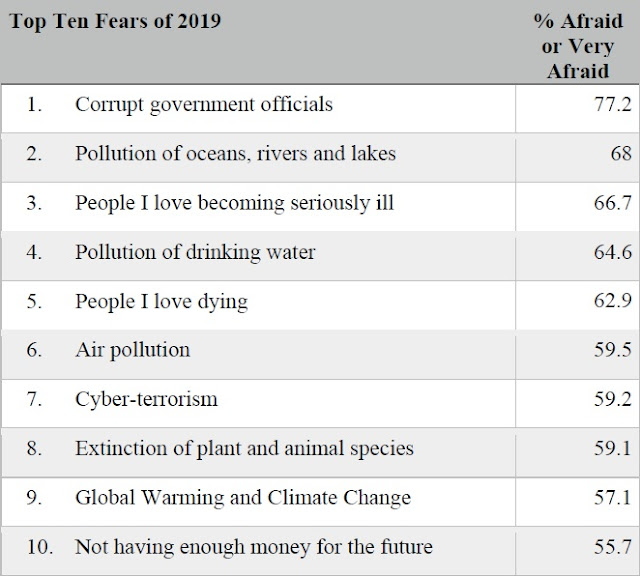 I note that the number one fear is still corrupt government officials, and the percentage has gone up from 60.6% to 77.2%, an increase of 27%.  I notice also that while in 2016, the other 9 out of 10 top fears all measured in the range of 35.5% to 41%, this year the other 9 ranged from 55.7% to 68%.  Is it valid to conclude people are more afraid of things in general?  Also note that some of them remain in the top ten: fear of "People I love becoming seriously ill" or dying, and not having enough money for the future.  This year's fear of cyber-terrorism sounds like or 2016's fear being a victim of a terrorism or terrorist attack on the country.  This year departs seriously from 2016 in the fear of pollution, climate change and extinction.