What's the Deal With The Honey Badger AR Pistol?

Back in August, the story got out that the Bureau of Alcohol Tobacco Firearms and Explosives (BATFE - motto, "Making It Up on the Fly Since, Well, Forever") had notified a company called Q, LLC that their AR Pistol, called Honey Badger, was a short-barreled rifle and therefore regulated under the National Firearms Act (NFA) subject to the $500 tax and absurd waiting period.  BATFE sent a "cease and desist" letter to Q that included warnings for their customers. 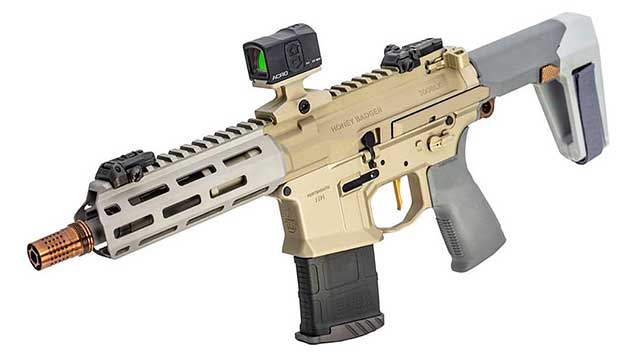 To get into what all those terms mean would take a thousand words, but to many readers who drop by here, they're familiar words and concepts.  I'd take a bet that a lot of people are saying something like, "it looks like any other AR pistol.  WTF??"  To make things even less clear, the BATFE has put their "cease and desist" order on hold, allegedly to get some sort of backing from someone higher.

Here's the short version. The NFA in 1934 created an arbitrary definition of a rifle and a pistol that depended on size and how you hold it. Suddenly, rifles with 12 or 14" barrels that used to cost $50 or less, required a $500 tax stamp. The difference was that a rifle was braced against the shoulder while a pistol was handheld.  A rifle (or shotgun) was required to have a barrel longer than 16".  A pistol wasn't.  When AR caliber pistols started to become available, they weren't allowed to have a foregrip, as you'll see on tons of ARs, but people found the recoil of the pistol uncomfortable to manage.  After the brace was invented, the BATFE essentially said if the brace is held against the shoulder, the pistol is magically transformed into a short barreled rifle.  Then they said, no, never mind.

I'd highly recommend that if you have questions about how we got where we are, or you just want to hear some solid commentary from Alex Bosco at SB Tactical who actually invented the Pistol Stabilizing Brace ® and Michael Bane, listen to Michael Bane's podcast .  It's about an hour but worth it.

Bane starts with the observation that this could be an attack on Donald Trump by insiders at the BATFE.  Holdovers put in place by Eric Holder.  It's no secret that there are anti-gun forces in the ranks of the BATFE.  This could be their attempt to drive a wedge between gun owners and Trump to help get Biden elected, so they can start to enact the destruction of the second amendment.  From what both of them say, the wedge appears to be working.

According to Alex Bosco, the BATFE is telling him they're defining weapons according to the old line about pornography: "We'll know it when we see it." They're making the law as obscure and impossible to understand as can be.  They're implying that if you make any modification to a gun that crosses some imaginary line that they won't tell you about, they'll subject you to the $10,000 fine and years in prison.  Maybe you put a red dot on you AR pistol, or a scope; never mind that you can put those on any handgun, you've made your AR pistol into a rifle so you're going to federal prison.

Tyrants love that sort of power.  Having some familiarity with the 80% lower concept and happenings, it seems to me the BATFE has always tried to make every ruling as muddy and unclear as possible.  The better to entrap you with.