It's time to address another one of those topics that requires us all to be adults.  It concerns the US debt. 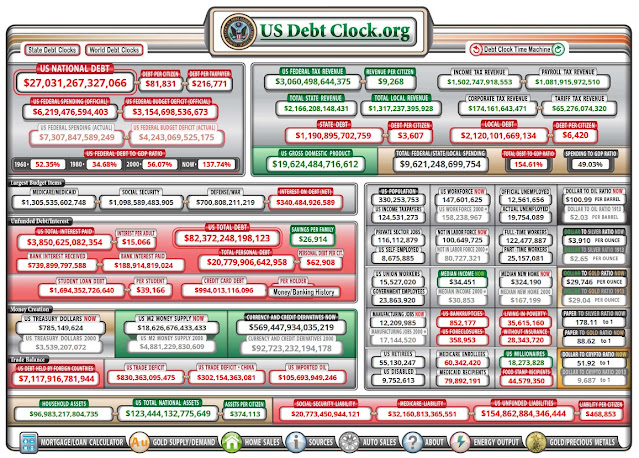 The US Federal debt has crossed the $27 trillion dollar mark.  On May 12, just five months ago, the debt had just crossed $25.1 trillion.  That was right after the $3 trillion "stimulus and rescue" package in response to the Covid-19 lock downs was passed, so in April of this year, that was $22 trillion.
I don't need to point out that we're a matter of weeks before the election.  We've seen some of the expenses that Biden/Harris/Hillary/whoever will put forward.  While the Biden/Harris team is drastically different from the Trump/Pence team, and it seems support for Trump/Pence is essential for a variety of reasons, perhaps even critical, I've been saying since '17 that deficit spending is Trump's weakest area.  The nonpartisan Committee for a Responsible Federal Budget (CRFB) released a study earlier this week, called “The Cost of the Trump and Biden Campaign Plans.”  Yes, Biden's plan is worse, but the differences aren't that great - on the order of 10 to 20%.  CRFB analyzed three different approaches for each candidate based on things the campaigns published, breaking them into three cost brackets. 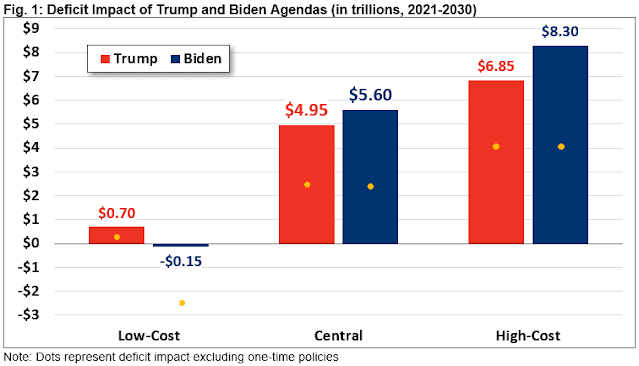 Note that the capture of the US Debt Clock says we are currently at debt of nearly 138% of GDP, nearly $217,000 per taxpayer, and things will get worse from here.
The report included this summary:

Under current law, trillion-dollar annual budget deficits will become the new normal, even after the current public health emergency subsides. Meanwhile, the national debt is projected to exceed the post-World War II record high over the next four-year term and reach twice the size of the economy within 30 years. Four major trust funds are also headed for insolvency, including the Highway and Medicare Hospital Insurance trust funds, within the next presidential term.

A debt to GDP ratio of over 200% is an exotic territory, and very few countries have survived long enough to get there; notably Japan.  They predict we'll be there by 2050.  Typically, countries economically collapse before they get that far in debt.  Like before they get to 150%.

As the report points out,


The national debt was growing rapidly before the necessary borrowing to combat the COVID-19 crisis, and this trajectory will continue after the crisis ends. Fiscal irresponsibility prior to the pandemic worsened structural deficits that were already growing due to rising health and retirement costs and insufficient revenue.

As someone who gravitates to the Information Theory of Money, I prefer a limited, commodity-based money that can't be created in infinite supply.  Nevertheless, I have to say that even John Maynard Keynes himself didn't say to deficit spend all the time.  He thought printing money was for bad times when relief was needed, and in good times nations would pay the deficits down.

As always, the election is a choice of the less bad candidate.  Either way we're facing long term debt problems that get worse.  Fed Chairman Powell this week said something to the effect that yes, we have long term debt problems, but this is not the time to attack them.  He's arguing essentially Keynes' point that he'll do more damage to more people by not trying to stimulate the economy than by trying to address the debt.  What he doesn't talk about is that the long term debt problem limits what he can do, because of the marginal utility of the dollar.  After dumping trillions of created dollars into the economy, how can doing less matter?

A year ago, the economy was strong; that would have been a time to start addressing deficits and trying to reduce the deficit's growth. Today we have the economy in shambles, cities in flames, and crisis after crisis. As a coach of mine once said, "you can only play the hand you've been dealt."  No matter what we do, the debt is going up along with the dangers that come with that; inflation is here, hyperinflation and collapse are possible.  Despite the CRFB report, the choice between the two teams isn't that close.