I haven't done one of these for a while, but I've been working a little bit at a time at figuring out how to put this engine together.
Let me lead with my chin and show the only mistake I've found so far.  I'm sure there will be more. 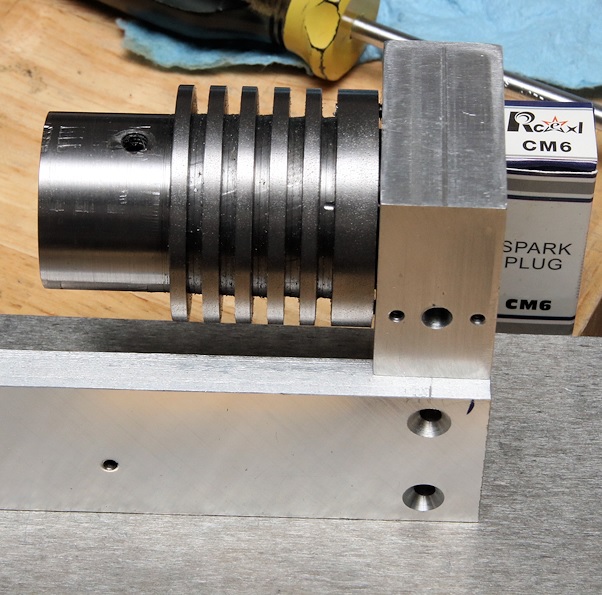 The top aluminum piece on right, holding the cylinder with its fins, is the cylinder head.  Its bottom edge is supposed to be flush with the front edge of bottom piece facing us with the two big countersunk holes.  The valve assembly that mounts over those three holes on the head won't fit.
The head is held in place with one #10-32 screw coming up through the bottom of the plate both parts are mounted to, so I checked the distance of the mounting hole to the edge of the plate.  That was fine, so I checked the distance of the bottom piece's mounting holes to the edge and those are fine.  The only thing left to be wrong is the hole in the bottom of the head and sure enough, I put it in the wrong place.  This is a view of the bottom of the cylinder head. 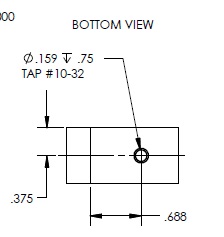 When I put the real part next to the drawing, it was obvious that I measured that 0.688" from the right edge and not the left.  It didn't take too long to fix, and I'm getting off easy.  The wrong hole is just to the left of the one that I added as shown, they almost touch.  It's a blind hole on the bottom of a piece that will never see the light of day again once it's permanently assembled.
So I built it up more with the parts that go in that area.  The valve block mounts with no problems now. 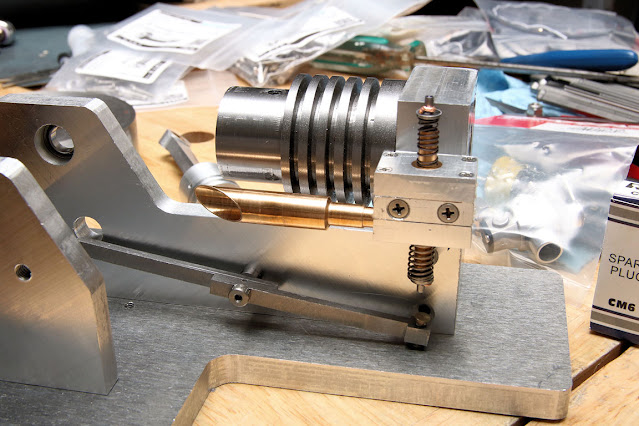 The plastic bag behind the metal to the right has the carburetor.  The Webster plans include a page of parts to make a DIY carburetor, but Webster himself says, "do yourself a favor and get an RC model carburetor."  You don't have to tell me twice.  I'll probably build one of these simple carburetors one of these days, but not now.  I need to come up with a gas tank, and I figure that since I have an RC model carb, why not an RC model gas tank?  I've done some preliminary searches, but I'd like a small gas tank, like an ounce or two, and the ones I've seen are bigger.
Finally, here's a shot of my bench with all the parts I've got.  The small parts are in a little plastic cup, lower left front.  There are others like the piston rings and the CDI ignition I bought, that are not pictured, plus some I haven't bought yet, like the gas tank and ignition points.  I expect to have to make a few custom little spacers (washers). 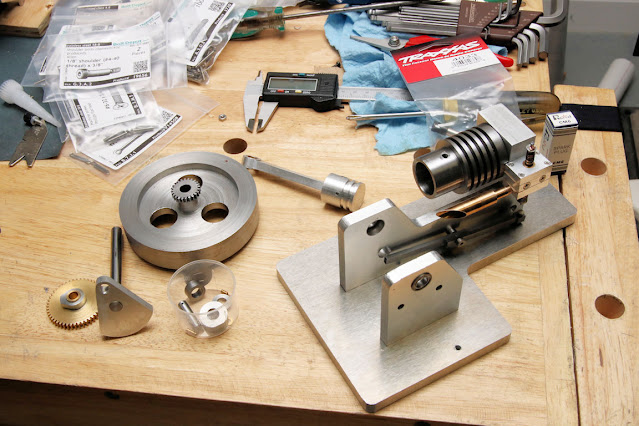 The Webster is said to be just about an ideal beginner's engine and easy to get running.  There's a lot of really neat model engines, and I find it understandable that people who go to the effort to draw up everything in CAD would charge for their plans.  Joe Webster released these plans to the public domain to help other beginners.  I hope to have mine running within a few weeks.  That's only going to happen if there are no major parts that need to be re-made.
Posted by SiGraybeard at 9:16 PM