The Great Barrington Declaration is statement from a group of infectious disease epidemiologists and public health scientists who have come together to protest the Covid-19 lockdowns and try to reduce the unwanted deaths and personal tragedies the lockdowns are causing.  Of course, last week, the WHO essentially kick started several stories about lockdowns and particularly about how countries with strong lockdowns fared no better - and some times worse - than countries without lockdowns.

I didn't start out going this direction.  I was reading a FEE article on a thing the Federal Reserve is doing (incompetently, of course) but stumbled across some interesting things down this side road.

To begin with, FEE itself has a week-old article, “5 Charts That Show Sweden’s Strategy Worked. The Lockdowns Failed."  Then they linked to an article invoking Elon Musk's bravado about opening the Almeda Tesla factory despite California lockdown rules  ("Tesla is restarting production today against Alameda County rules. I will be on the line with everyone else.  If anyone is arrested, I ask that it only be me.")  Elsewhere in the article Musk said, "Sweden Was Right" and tweeted this plot: 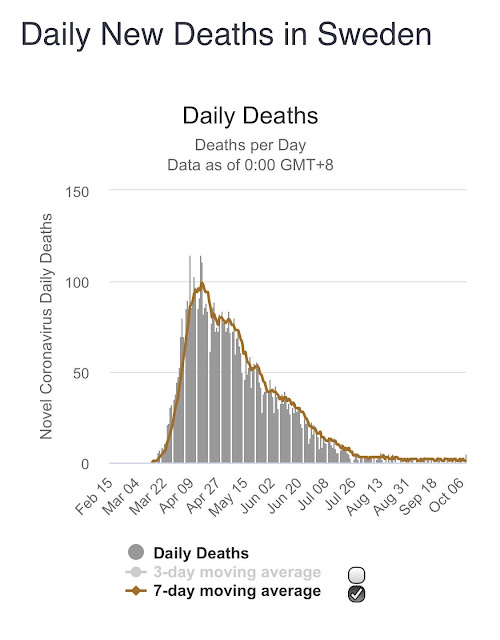 It's pretty clear that the pandemic was over in Sweden by about mid to late June.  According to other public records, the reason for the large number of deaths they had in the exponential growth phase around the start of April and through the first couple of months of decline was due to making the Cuomo mistake and putting active Covid cases into nursing homes.

Musk said this in a reply to Toby Young's Tweet about the Great Barrington Declaration. 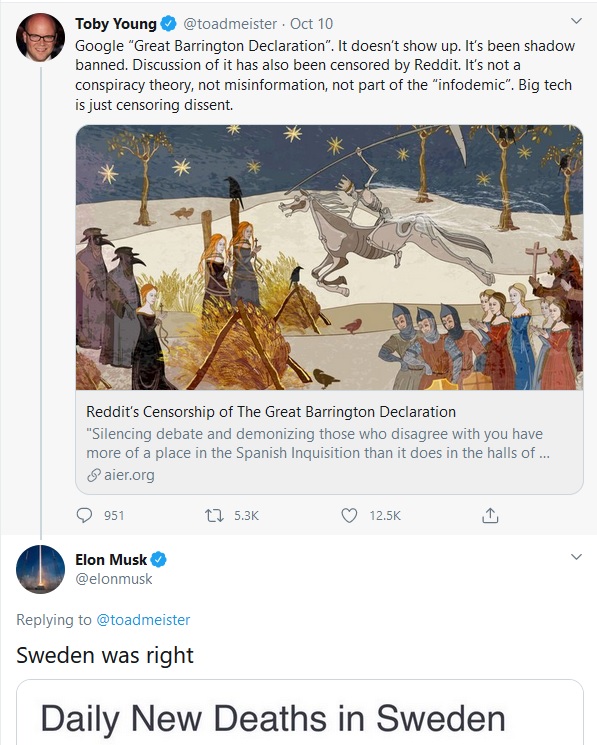 Note that Young says that both Google and Reddit have shadow banned the declaration, which is severe censorship.  It's banning any mention by a group of qualified scientists of ideas that disagree with the candidate they're propping up.
Because I don't use Google or the Big Tech media (present blog excluded, of course), I had no problems finding the Declaration.  I use Duck Duck Go and it was the first return in the search results.  I tested Bing and it was the first return in those results, too.
Listen, if you're an adult with an IQ above room temperature, and haven't stopped using Google yet, you haven't been paying attention.  You really shouldn't be using Google as your search engine; and you shouldn't be using Twitter or Facebook for your news feed.  Instagram or Pinterest are for looking at pretty things or collecting pictures, not news or current events.  Actually, scratch the limit about having an "IQ above room temperature."  Nobody should be using Google or those others.  These tech companies are too dishonest to reward with your eyeballs (which is what they're charging advertisers for).
Posted by SiGraybeard at 10:01 PM