The Changing of the Projects - Part 2 - Comments to the Comments

There were a bunch of really great comments to my post last night about the next engine and the other project I'm working on and the general topic.  Many of them resonated with things I've been thinking of, so much that I thought it would tough to get to them all but there are similarities.  Hope this isn't too "me, me, me, me" for everyone else.

There were several comments along the line of building a small but useful engine, and several people referred to a Stirling engine.  A useful engine is something I've given a lot of thought to and is part of the reason I'm interested in building that hit and miss engine; it's 2-1/2 cubic inches.  I don't know how much power it's capable of, but as a guideline I think a good engine can get 1 HP per cubic inch.  I seriously doubt that I could get 2-1/2 HP out of it, but maybe it could be 1-1/2 or 1 HP.  Here's what I consider a really important number for you.  It's slightly off the exact value but easier to remember.

I can think of that engine as 750Watt to a 1,125Watt battery charger/power supply.  I could wrap a belt around the big flywheel hub visible in that picture and use the engine to drive a generator.  (It's more prudent to go with 80% of those numbers because you'll have inefficiencies in your charging system.)

I know that Stirling engines can do useful work, but I don't know how big a Stirling engine to think about to get 750 watts.  They definitely have their place, I just don't know what it is.  I've seen guys use one to charge a cellphone which to me is touching the bottom end of the useful scale.

WCR, if you have 3HP (2,250 watts) worth of steam, why not use a steam engine instead of a Stirling?  There are tons of very capable steam engine designs and every engine builder seems to build at least a couple.  Are you thinking of a Stirling engine because of some advantage they have?  (that I don't know about...)

Stefan, I think your approach is a cool idea.  500W out of a steam engine to run a generator and charge batteries, is a good, useful size; to a 12V storage battery, half a kW is over 36 amps.

An idea I keep thinking about, but have no idea how to really get there, is the widely available 49cc engines like they use on motorbikes.  These "49ers" are almost exactly 3 cubic inches, and the parts are available everywhere.  You can buy an entire, ready to mount and run engine for well under $100.  If you go to eBay, you'll find all the parts you can imagine.  How about a carburetor for $11?  The RC model carb on my Webster cost over $30. I see pistons for 7 to $10, too.  I just don't know that those parts fit in "any" 49er engine and I can see buying a bunch of parts only to not have them fit together.

I don't know how much the piston in my Webster cost, but among the critical parts in an internal combustion engine is how well the piston fits.  The real cost of the piston is the hours of measuring, remeasuring, and generally agonizing over the fit.  A ready made cylinder and piston that fits it is really tempting.

And Titaniumboy - I'd never heard of the BAXEDM project. I know of the existence of EDM but not much about what it really can do and do for me. I'll be looking into that. 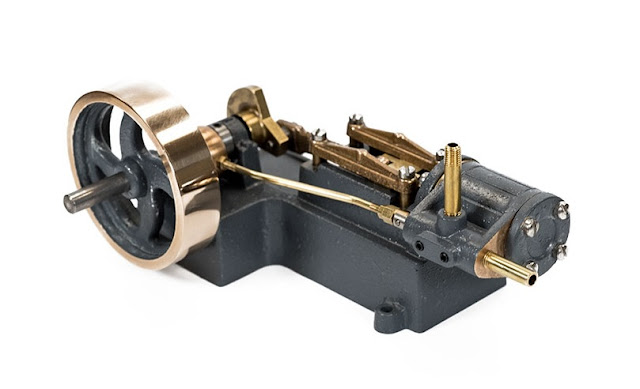 A PM Research #3 steam engine.  Fairly small, at 0.15 cubic inch displacement, but available as fully machined parts so all that's left is to assemble it.  Their #6 engine is 4.4 cubic inches, but is castings to machine and assemble yourself.