The Changing of the Projects

While I haven't decided that my Webster engine is just not going to get any more effort devoted to it, I haven't touched it in a week.  I just have had no luck in getting it to run better.  If anything it has gotten worse.  Maybe it's time to put it on a plaque and stick that on the shelf, but I keep hoping for ideas.

I don't really have anything picked out to build for the next project.  I have several sets of prints I've downloaded over the years for potential next projects, but nothing has given me that "I have got to do this" feeling.  Naturally, I'd like something that runs better than this engine, and overcomes it's weak spots - I thought relying on the piston creating vacuum to open the intake valve wasn't as reliable as using a push rod to open a valve.

There's a popular model that I've seen at all both of the shows we've been to that I'm considering.  PM Research sells a kit of castings for a 1/4 scale model of a Hit and Miss engine from the early 20th century that kind of appeals to me.  It had the advantage of being bigger than the Webster; it's just about 2-1/2 cubic inches vs. 3/4 cubic inch.  The flywheel seems just about the limit of what I can turn on my lathe at 8-1/4 diameter (I have an "8-1/2 by" lathe).  This is the water cooled version and they make one that doesn't have that big tank on the right.  The water cooled version was the first model I ever saw, so I think of water cooled as the way to make this engine. 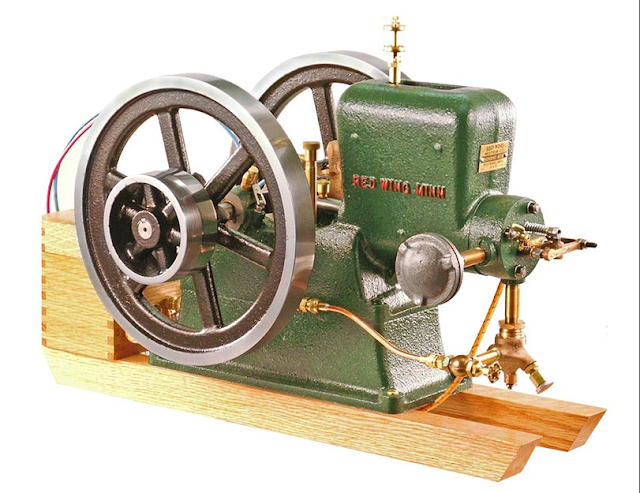 The main drawback is that kit is $500 and I'm sure there will more expenses along the way.  I've never machined something from castings, so there would be lots of learning, that's for sure.

Other thoughts include a Stirling Engine of some sort, or perhaps not an engine at all.  Maybe an orrery?

My main project lately has been resurrection of an old project, but on the electronics/ham radio end of the house.  Long time readers might remember me talking of trying to get my ham radio linear amplifier running after the lightning strike we had back in August of '19; summary here.  After I got the insurance reimbursement for the amplifier, I couldn't bring myself to throw it out.  Why?  For all the world, it seemed like the only thing wrong with it was the high voltage/high current power supply.  Unfortunately, the only way I could know that would be to replace the power supply.

Somewhere along the line, I got the idea that I could buy a cheap, lower current power supply and test the radio frequency (RF) deck one subcircuit at a time.  I found one on eBay for $72.  If it ends up being a waste and I don't fix the amplifier, then I'll put it back on eBay myself.

The amplifier is roughly 1/3 power supply and 2/3 RF deck.  The RF deck is my home turf and I feel confident I could fix anything broken in it.  The amplifier has four identical amplifier modules based on a transistor I actually worked with about 20 years ago.  I did primarily receiver design for a living but would help optimize or solve problems with RF power amplifiers that someone else designed.

The power supply is more a question of determining how much I need to keep and how much I can get rid of and to make that call I pretty much need to understand their schematics and other documentation.  Sparse, but far, far better than what I had in the fall of '19.