Getting NASA Out of the 'Getting There' Business

If there's one major positive of the development of private industry spaceflight, it's that NASA is starting to swing their emphasis from the "how" of getting to the places they're interested in over to the mission, the "what to do once we're there" side.  The unmanned side has long been focused on the missions, what the probe was going to do and how it was going to do it, now the idea is spreading to the manned side.  It's one thing to talk about going to the Moon and Mars, which is all they've done for the last 20 years, it's another thing to work on what the missions should be.  Now that manned flight is becoming a commodity, what should those astronauts do?  What should the Artemis program do, besides ensuring they land the first "left-handed midget lesbian" on the moon (thanks to commenter TwoDogs)?

Eric Berger, the space guy at Ars Technica, posted a good, thoughtful look at the subject this week.


"It's very exciting that we're starting to lay in the foundations for these key capabilities," said Kathy Lueders, the engineer who leads human exploration for NASA. "This isn't a dream anymore. We've got very, very concrete steps."

Although it's currently only SpaceX providing that launch services, Boeing is still in the midst of trying to qualify their Starliner capsule, and NASA has said they think the more providers the better.  The most recent date for the next Starliner test flight that I can find is "next fall."  Like SpaceX went through, the first mission will be unmanned and once the capsule - and the software that almost lost it on their first flight - are approved, a manned test flight will follow.  That looks to be in early 2022.  Also likely to be in early '22 is the first unmanned flight of the SLS and Orion spacecraft.  NASA has spent a decade and tens of billions of dollars developing those two systems.

Here's where it gets fascinating.  Extensive quote from Ars Technica (bold added):


NASA selected SpaceX for its Human Landing System contract on April 16, awarding the company $2.89 billion for Starship development costs, one uncrewed demonstration test, and one crewed landing as early as 2024. This seems like a remarkable value.

Three days later, NASA's inspector general released a report that included the cost of the Human Landing System for NASA through this first landing. The report estimated that NASA would spend $17.3 billion for lander development and the first human landing. So with its fixed-price award to SpaceX, NASA saved more than $14 billion in its projected costs for the Artemis landing. Effectively, this means that NASA could squeeze a Moon program into its existing budget rather than needing billions of dollars more in annual budgets from Congress.

This cost savings is but one potential benefit of Starship. The other is an unparalleled capability to deliver cargo to the Moon. After refueling in low Earth orbit, a fully reusable Starship carrying cargo only—meaning it flies to the Moon, unloads its payload, and returns to Earth—could carry more than 50 tons to the lunar surface, according to estimates by physicist Casey Handmer. An expendable Starship, which lands on the Moon and stays, could bring more than 200 tons to the Moon.

Two hundred tons! If it's difficult to conceptualize how much cargo this is, consider the lunar module used by the Apollo Program. In a "truck" configuration for cargo only, it was estimated that this vehicle could bring about 5 tons down to the lunar surface. So Starship would have the capacity to bring more than 40 times as much material down to the Moon, per mission.

The other way of stating that comparison is that in the peak of the Apollo days, it would have taken 40 Saturn V rockets to put the same payload on the moon as one Starship.


It goes without saying that the "fully operational Starship" doesn't exist; neither does the on-orbit refueling that Casey Handmer figured into the numbers that gave 200 tons to the lunar surface (and that NASA is working with SpaceX to implement).  Naturally, that entails risk.  The counterpoint to that observation is that Starship is so far ahead of anything else that even if it misses some of that 200 tons, say it delivers 150 tons, it's still far beyond anything that mission planners have dreamt of having.

The key to colonizing the moon is much like the keys to colonizing Antarctica.  Most importantly, a supply chain that can bring tons and operate on a routine schedule.


If SpaceX's Starship program delivers on its promises, NASA would no longer have to consider brief forays on the Moon but could build bona fide cities and allow commercial activity to thrive. Thales Alenia could build large, pressurized domes for habitats. Nokia could build its LTE/4G network on the Moon. We could have mining, manufacturing, space tourism, and so much more. The cost of getting people and materials to the Moon has always been the limiting factor for any of these ventures to take place.

The other advantage to NASA is that they're supposed to be developing technologies for space exploration, and then passing them off to the private sector.  There are desperately needed technologies for life on a hostile planet and NASA has actually created research groups to investigate these.  Marshall Spaceflight Center in Huntsville, AL has an Environmental Control and Life Support System (ECLSS) —that specializes in regenerative life support.  If humans are serious about living on the Moon, surviving six-month journeys to Mars, or settling on the surface of Mars itself, we're going to need to learn to live off the land. Recycling air and water, solving waste issues, and more are essential to that.  Perhaps Marshall could focus less on getting us there and more on keeping us alive once we've made it. 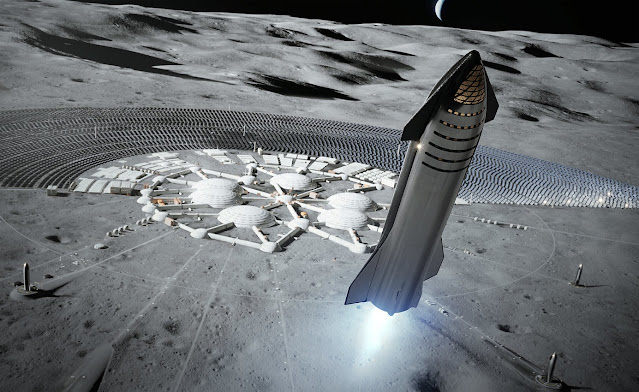