I couldn't help but smirk at yesterday's story that despite all of our anguishing about eating the right things and avoiding all the wrong things that are causing cancer, two thirds of the time getting cancer comes down to pure, dumb, luck.

I've posted before about our experiences with cancer - probably the best summary here.   In our talks with oncologists one of them left me with a quote that I'll never forget, "sometimes cells just freak out".  I think the study confirms that view.

Research published in Science (the house journal of the American Association for the Advancement of Science), showed two thirds of the cancer types analyzed were caused just by chance mutations rather than lifestyle.  Naturally, the chattering class is saying this doesn't mean you can just do what you want.  Who do you think you are?  You're not allowed to live as you want.

Certainly smoking is so strongly linked to lung cancer that when doctors find non-smokers with the disease, they're considered remarkable cases, and the study doesn't say you can ignore that and go light up a few.

Beyond smoking, though, I personally think the links are weaker.  Sun exposure is linked with skin cancer, but it's not the strongest link you can imagine.  For example, melanoma, the most lethal type of skin cancer is often found on the soles of feet and in other places where most people don't expose themselves to the sun.  The British Medical Journal published an article back in 2008 saying sunlight was not a major cause of melanoma.  Chances are you've heard that you should get lots of fiber to prevent colon cancer, but that link has been discounted many times, such as this summary link to a 2005 JAMA article.  I recall reading an article in student science journal saying the same thing about 20 years before that.

Cross-cultural dietary studies that give rise to "eat this, not that" links always seem to be more tenuous when they're closely studied.  If you've got the time and interest, Denise Minger's fisking of the China Study is worth reading - and probably got her the contract to write her book. 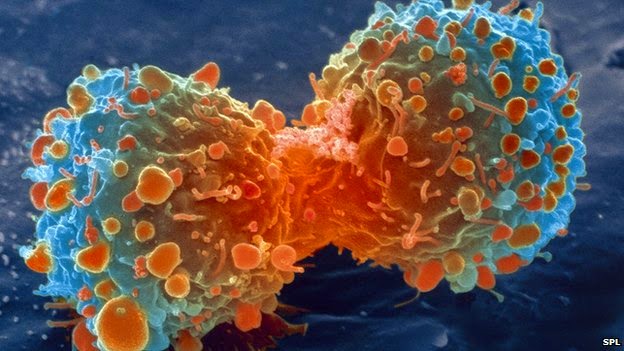 When Mrs. Graybeard had her bout with breast cancer, one of her coworkers gave us another quote that stuck with me: "what did you do to get cancer?".   Too often, people seem to live with the idea that if they just live this one right way, or eat this one super food, or take this one supplement, they'll never get cancer, and consequently, if you do get cancer it's because you did something wrong.  Another one of those things I heard that stuck with me was the director of the bone marrow transplant clinic who said, "I have a clinic full of women who were doing everything right" - about that idea.

Maybe this study will remove some of accusatory tone directed at cancer patients.   Lord knows they have it tough enough without that.

Speaking of which, Lawyer With A Gun, who has been in my linked blogs for as long as I can remember, reports his wife is in the worst of it right now.  Stop by and send prayers, good wishes, or just kind words.  I certainly do the same for any of you readers who might be in the same spot.