Their "Inalienable Right" to Get In Your Face

As the momentum to continue their anti-police demonstrations fizzles, the diehards in the movement have decided they have a right to get in people's faces and interrupt their lunch or other personal moments.

Of course, it's only acceptable to do this to white people.  According to the Mail (UK), the groups targeted areas they considered to "white spaces".  Not just brunch spots, they even ended up protesting in the Apple Store in Berkeley.


Dozens of demonstrators today stormed restaurants and targeted white diners in New York and California as part of a 'Black Brunch' protest against alleged police violence.

Carrying banners, the chanting protesters entered a number of venues in New York City that they identified as 'white spaces', including midtown eateries: Lallisse, Maialino and Pershing Square.

Once inside, they 'disrupted' customers' meals by reading out the names of African-Americans killed by police, including Michael Brown, 17, who was shot dead by officer Darren Wilson last August.

Addressing staff and patrons, they shouted: 'Every 28 hours, a black person in America is killed by the police. These are our brothers and sisters. Today and every day, we honor their lives.'

At least one of the demonstrators took to Twitter to proclaim her disdain for people who thought they could go out for a peaceful, friendly meal with friends or family.  (Found here) 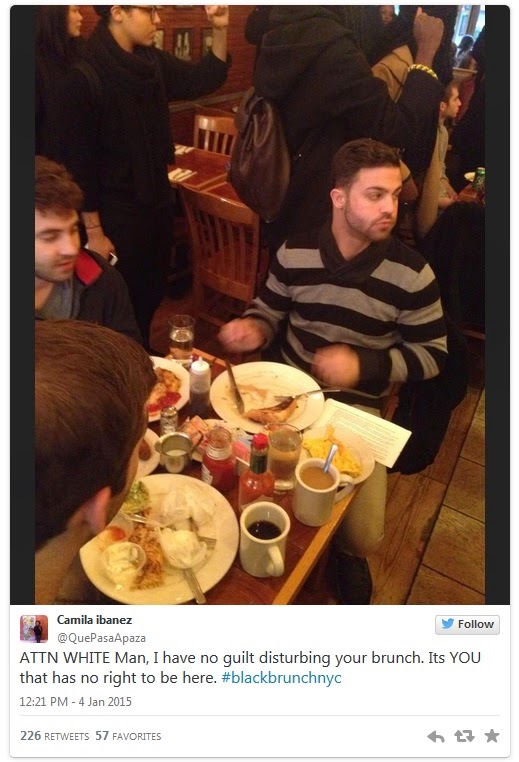 I'm not sure what the definition of a "white space" is, since discrimination in restaurants is a violation of Federal laws, but this is even more stupid.  How can she say a paying customer has no right to be there?  Yet she, as a non-patron has a right to interrupt a business, piss off their customers and create a public nuisance? She doesn't want equal rights, she wants special treatment.

There was little in the way of push back, and some customers raised their fists in solidarity, possibly assuming they'd be pulled outside and skinned alive interrupted longer if they didn't.  Of course, anyone knows that if you fought back against some form of attack, you'd be torn apart in the press as if set upon by wolves.