How Did I Get Here?

How did it get to be Sunday night?

Yesterday was the Orlando International Guitar and Music Expo.  We had never been to one; in fact, I first learned about it last year the Monday after the show.  After looking in a few calendars for another guitar show in a reasonable driving distance, I put a memo in my Calendar to look for it in December.  We took the 90 minute or so drive over to see what these shows are like.

To begin, it's held at Orlando's Orange County Fairgrounds, the same venue that houses the Orlando Hamcation I've written about before, but in only one of the buildings while the Hamcation uses three.  Still, it was a big room that was completely full and while the dominant impression is a room full of guitars on tables, there was quite a bit more.  This picture from last year is only part of the room, and it's less densely packed than this year looked.  (Photo from the show organizers) 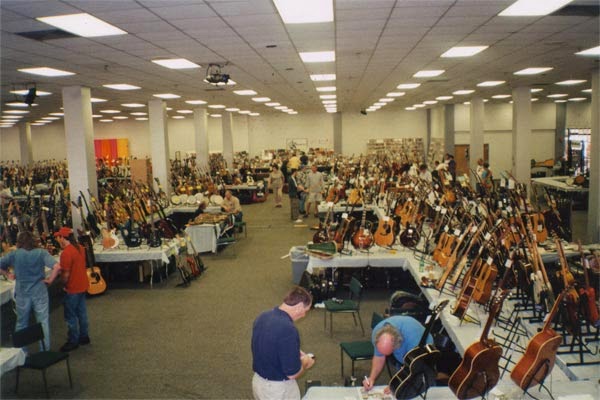 I was astounded at the sheer number of instruments commanding four digit prices - and there was at least one I saw that was priced at $100,000 (I think it was this one).  There were other instruments as well: mandolins, ukeleles, banjos and others - including a harp guitar.  I saw instruments that I can't name.  70s rocker Rick Derringer was there as a spokesperson for a manufacturer, taking pictures with folks and doing a demo.  The room had the usual din of hundreds of people talking along with a few dozen people at any moment playing different riffs and songs as they tried out new purchases.

But that only took up six or seven hours, including 3 to 4 driving the round trip.  Didn't buy a thing, except a small wooden pick tray from a CNC router shop primarily selling raw Telecaster and Stratocaster bodies for home builders.  We were home before 5 and had a normal Saturday evening.

Today...I almost can't tell you what we did.  Other than a short Wally World trip to get sandpaper for my project, and an hour or so doing some sanding, I would swear it should be noon.