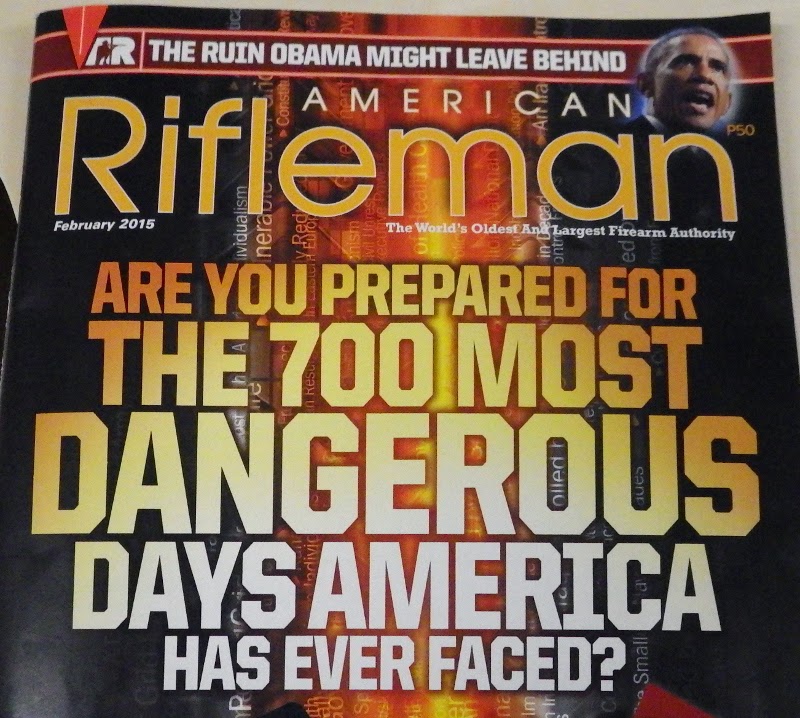 I agree with assessment that we're entering an extremely dangerous period in the world;  some of it I've written about quite recently, and some of it is the result of Obama and his daemons.  I don't, however, agree with the NRA's approach.  Their emphasis is gun control; primarily fundraising to oppose gun control.  (Full disclosure: I'm a life member.  It was deeply on sale or I wouldn't have done it).

The NRA is the 800 pound gorilla in the gun rights fight, but I've seen them described as "pilloried by both their friends and enemies".  The knock on them (not that I need to tell you) is that they play the DC insider game and don't really care about a knockout punch to win the fight for our rights; they just want to keep the gravy train going - like every other lobby going.

While they're the largest of the gun owner groups, they're still only a few million members out of a country of around 300 million.  The exact number seems harder to find than it should, but is on the order of 5 to 10 million people.  Anti-gun groups routinely try to say it's less than that, but it's still not 5% of the population.  In a nation where people routinely say there's 300 million guns, that strikes me as a small percentage of gun owners.  My guess is there's at least 30 million gun owners.  While it's conceivable that if they had 30 million members they would have more political impact, I don't think political lobbying is the way to go.

I think the fight is the broader cultural war; independence and self-reliance vs. reliance on the omnipotent state.  The answer is to make gun ownership more mainstream and accepted.  We need to help show everyone that gun ownership is not the thug culture depicted on TV and in the movies.  One of the strongest signs that progress is being made is that Gallup poll released in November showing that 63% of respondents said that having a gun in the house makes it a safer place.  By a 2/3 to 1/3 margin, they rejected the gun control default position that there should be no guns anywhere.

Self-adoring elitists and Ivy League types (yeah, I repeat myself) are always attacking the intelligence of the average American, but average Americans seem to have good common sense.  Maybe they can't build a bridge or design an interstate, but they seem to have a good handle on the fact that "the only thing that stops a bad guy with a gun is a good guy with a gun", a pretty common sense idea. As concealed carry and "gun culture 2.0" continues to grow, more and more people are going to find that they know someone who carries.  The more people who think, "I know Susie has a gun, and she's not a violent nut job", the more likely they are to at least not consider gun control as the standard way to be or to not consider gun control as the immediate response to some insane, mass shooter.

If they're good at anything, the Alinsky-ites are good at controlling the messages.  In the 1990s, the average 20-something didn't think about gay marriage, today it's difficult to find a 20-something who isn't in favor of it.  Two can play that game.  90 Miles links to a post on Gun Watch about mass shootings stopped by an armed citizen.  There are positive stories about defensive gun use every day; information that reinforces the positive aspects of gun ownership.  Raising that number from 63% to 80% seems daunting, and will mean fighting a propaganda war against propagandists, but it's such a common sense position, it has to sink in.

Helping people see gun control as counterproductive will buy you more in the long run than just sending more money to the DC hog trough.