I've never been to the Consumer Electronics Show.  The simplest explanation works here: I've never worked in a business that valued it and sent anyone.  I've spent my career in industrial and military electronics, which is more concerned with absolute dependability than with low prices or "Wow factor".   It's still fun to read what's coming in gadgets and other home electronics, though, and I try to keep an eye on the show every year.

If there was a theme to CES, I think it would have to be personal electronics.  One of the big marketing buzz words was "wearable".  Not just smart watches and Google Glasses, but LED-enhanced clothing and fitness trackers/monitors.  You'll be pleased (?) to note the Golden Age of Narcissism I wrote about in August remains in full swing, with swarming, intelligent, autonomous drones to take selfies of you on the floor at CES.   Parrot showed of its Bebop Drone, the lightest drone of its kind, with a 14-megapixel fisheye camera that does image stabilization. Though image stabilization generally requires more weight, Parrot's drone weighs in at 400-grams, and can stream live video across a Broadcom 2x2 WiFi chip (capable of 2.4GHz and 5GHz frequencies) while a gyroscope, accelerometer, magnetometer, and pressure sensor stabilize the camera's 180-degree view.  Preview video here.

Personal medical devices were big.  A Mountain View, CA, company called Scanadu showed a new medical sensor called the Scout.  The device can track heart rate, temperature, blood pressure, respiratory rate, and oxygen levels in the blood.  After the device scans a user's forehead, the data is sent to your smartphone via Bluetooth.  (Sound like a rough cut at a Star Trek Tricorder?  It's not a coincidence.  Qualcomm, the electronics component and wireless infrastructure company is offering an X-Prize for the first Tricorder and the Scanadu Scout is in the running)  Meanwhile, Scanadu is developing a Scanaflo, a urinalysis test kit capable of testing for levels of glucose, protein, leukocytes, nitrites, blood, bilirubin, urobilinogen, microalbumin, creatinine, ketone, specific gravity, and pH in urine. It will send you the results via your smartphone, or directly to your doctor if you prefer.

Something I thought was cool was the jamstick.  Most people are aware of MIDI, the Musical Instrument Digital Interface, a standard that's used for transmitting music between composers, instruments, and users.  Where do you start?  Often with a MIDI Controller, where you'll compose different pieces, give them different voices, and write all the tracks.  If you go to a music retailer and look for MIDI Controllers, you mostly find a lot of keyboards.  What if you don't play keyboards, but you do play guitar?  That's where the jamstick comes in.  It looks like the last five frets on a guitar's neck but rather than actually simulating the notes you hit and synthesizing a sound, it's the equivalent of the keyboard.  It uses proprietary IR sensing to determine finger position and detect the pick on the fretboard.  JamStick connects to your device or home network by WiFi.

Of course there was more; acres more.  Not all egotistic features like the drones to follow you and document your life, a lot of things to make life a bit more enjoyable.  I'd like to go someday.  Maybe after I retire... 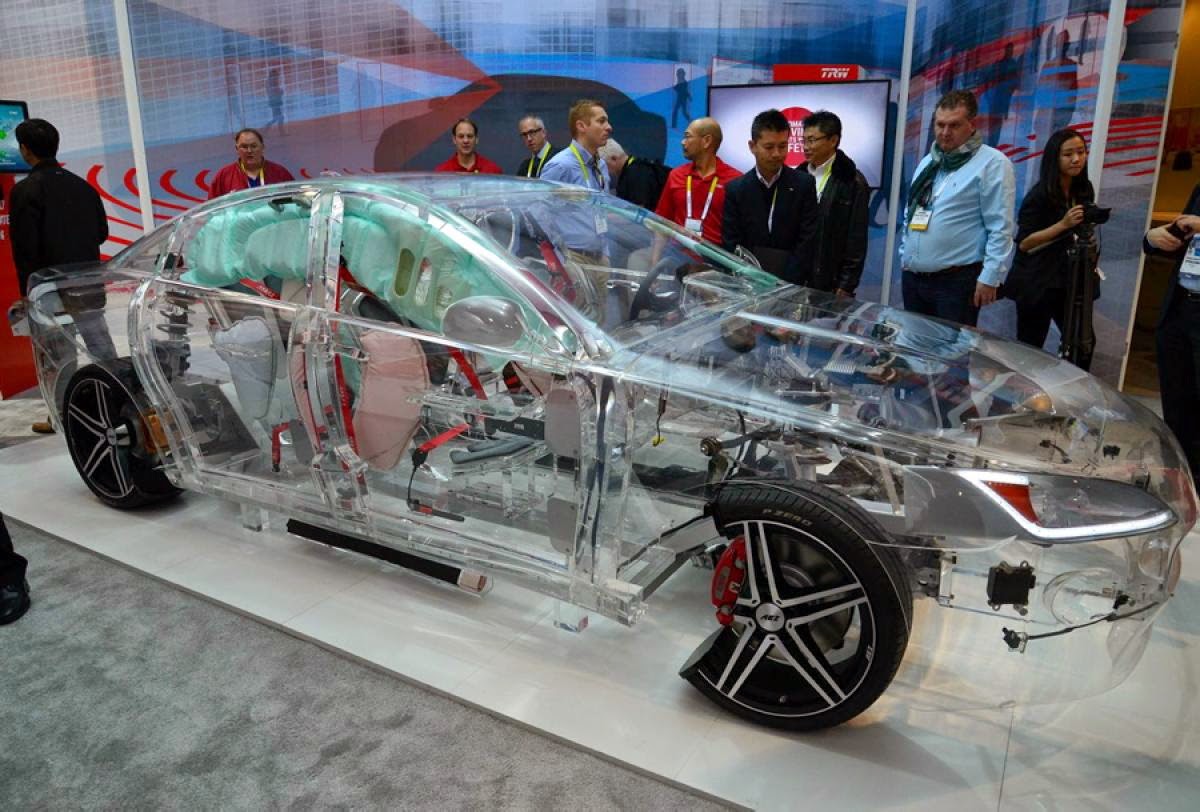 TRW used this cutaway car to show all the active and passive safety equipment they make for modern cars.