What To Make of "The Economy"?

So we heard on Friday the official Bureau of Labor Statistics report saying that the economy added 252,000 jobs in December, a drop from November’s 321,000 but still in line with the recent pace. The official unemployment number (U3) rate fell to 5.6%, the lowest it has been since W's administration.  Yet everybody knows that the actual unemployment is higher than the U3; it doesn't count people who have fallen off unemployment or who have "given up looking".  Shadowstats estimates the real unemployment rate at close to 23%.

5.6% is optimistic news, yet the Dow shrugged and dropped 170 points.  Since the start of the year, the Dow dropped most of December's gains and then promptly regained them, finally settling out around where it was at the start of December.  The stock market is extremely sensitive to the Federal Reserve's money wrangling, since the inflow of US money is driving it.  A new force has entered the scene, though, foreign investment in the American equities markets.  Equities markets in other countries are doing poorly and our stock market is viewed as safer, better investments.  The dollar is at near-record highs compared to other currencies, under the belief that we may have our own troubles, such as our $18.1 Trillion national debt, but the other countries' troubles are worse - or as I like to put it: the US is the least disgusting girl at the dance.

Even with all these positive signs, it's not too hard to find things that make you a bit less sanguine.  The free Technical Analysis newsletter I get is full of charts that indicate caution: the inflow or outflow of money into the market from the large institutional buyers, the number of stocks setting new lows, and the Relative Strength Index for the stocks.  Everything is indicating caution.  In an article on the effects of immigration on employment, the Atlantic Monthly threw out the little fact that the percentage of men aged 25 to 54 who are working or looking for work has dropped to the lowest point in recorded history. I don't have a graph of that, but the graph of the % of the population in the labor force shows a value last seen around 1977. 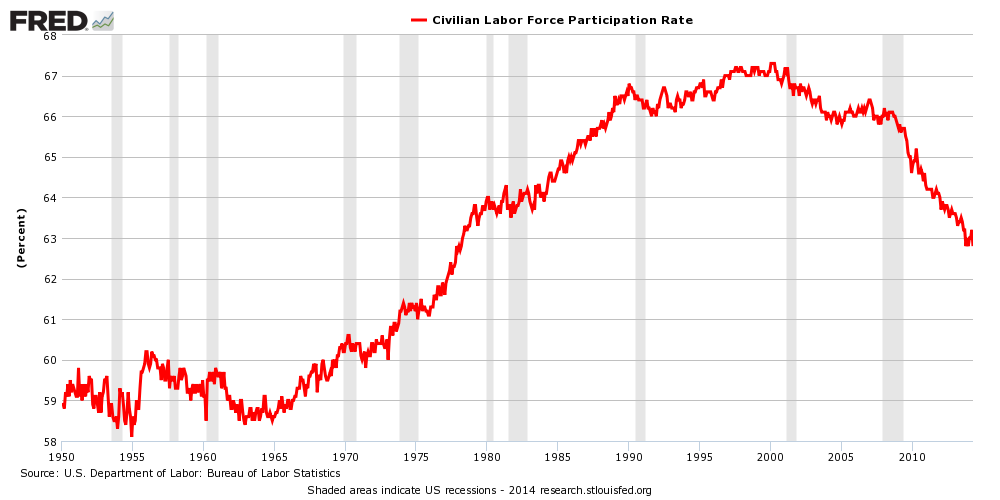 Elsewhere around the world, as reported last month, the price of oil dropping into the high $40s is having an impact on all producers. And also, as reported, the price of oil that keeps producers in the red runs from $77 for Qatar to $181 for Libya.  Per barrel.  It's $47.55 as I type this.  This is absolutely wonderful for you and I but it doesn't look quite as good from the global geopolitical stability view.  It doesn't just impact Vladimir "Studs" Putin (who needs around $100/bbl): it has the potential to crash a lot of the financial sector in this country. Go read Jim Rickards' article linked there for some good examples of how this can play out.


Through the derivative contract the loss now moves over to the bank. It’s not the oil company that suffers the loss, it’s the bank. This is the case with the global financial system today — you never know where the risks end up.

That risk just might be in your 401k or other retirement account, if you bought the right investment vehicle.

And there's more.  Russia has been reported to have bought hundreds of tons of gold last year.  It's no secret they want to end the dollar's reign as the world's reserve currency.  Their agreements with the BRIC countries and particularly China to not trade in dollars are well known.  We know, for example, that a few times in 2013, China bought the equivalent of every single ounce of gold produced in the world, while our Federal Reserve clings to their Keynesian talk of gold as a "barbaric relic".  Makes you wonder which side knows something and which side is wrong. 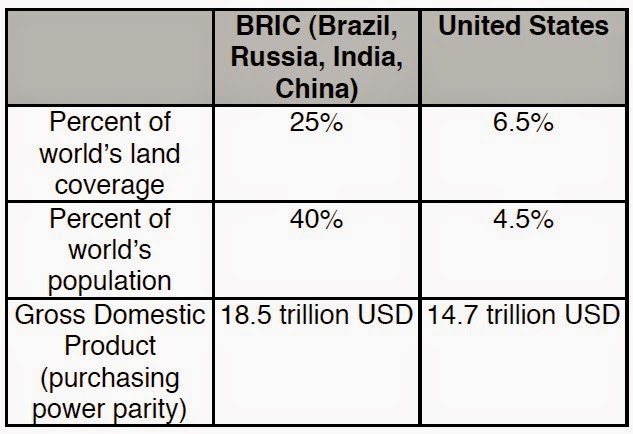 So what do we make of the economy?  It's hard to say.  It's not in collapse, but it sure isn't as rosy as the "thrill up my leg" media would have you believe.  I don't want to be someone who always sees collapse coming, even when everything is wonderful, but (1) I damned sure want to see collapse coming when it really is coming, and the sooner the better, and (2) I've always believed that if you hope to make more than the majority in the markets, you shouldn't do what everyone else is doing.

It's a cliche that the time to buy into a crashed bear market is when there's (metaphorical) blood in the streets and everyone is at their absolute most pessimistic.  They're desperate to get rid of their investments that have been sinking and bleeding their wealth away.  Likewise it's true that every bear market starts at the peak, when everyone is happy and thinks the good times will roll on forever.

Since I get to guess, I think that the situation is pretty dicey.  The proverbial black swan could fly in at any time in the guise of a really bad attack like the Charlie Hebdo massacre here in the US, or worse.  On the other hand it could sit like this for quite some time.  Given the timing of other market crashes, my bet is on next September or October.