When this month's Microwave Journal trade magazine arrived, I was rather surprised to see a feature article called "Wideband Omnidirectional Microwave Cloaking" with a rather good explanation and demonstration videos.  The article is full of details, references and all needed information, but is written for working specialists with good foundation in electromagnetics.  I know some of my readers will understand it, but you may have seen it already.  If you have the resources, you might be able to duplicate it, but the company, Fractal Antenna Systems of Bedford, MA, has patented several aspects of the system.

In a nutshell, what happens is they cover an object with an antenna array which keeps an object from reflecting or absorbing radio waves.  Instead the array of antennas (printed antennas on flexible, hi quality insulators) cancels reflections or backscatter from the body, and directs the waves around and away from it in the direction it was originally traveling.  Fractal Antenna Systems' technique uses printed Minkowski Fractal patterns, with antennas spaced closely to each other.  The antennas are passive; they absorb the field from source and re-radiate it in directions that add up in the desired way direction, forming what they call a metamaterial.   Metamaterial cloaking is an area that has been discussed theoretically for several years.   This is it.  The term for the forward radiation, seen in this diagram, is evanescent surface wave, or ESW: 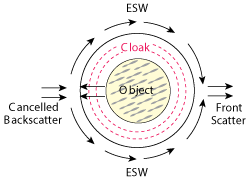 Imagine coating an aircraft with this, so that radar pulses are directed around the aircraft and aren't reflected to the radar operator. Similarly, radio returns or noise from beyond you would pass through you as though you weren't there.

If you've got a really good memory and have been coming here for years, you'll remember that we've spoken about cloaking technologies before (read the comments, too).  In the conclusion of that little piece, I said,


The technology to do this in visible light is very likely many years away, but imagine light-piping (fiber optics) an image from one side of a cloak to another, so that the objects on one side of you can be seen as if you weren't there.  I expect the first uses will be to disguise soldiers from being seen from great distances; it will be a long time before you could stand near someone and not see them.

That is essentially what this is doing, only at low radio frequencies instead of light frequencies.  I think the day of operational cloaking devices for most sensors just got a bit closer.

Although I couldn't embed them here, if you want to see a couple of short (~ 5 minute) videos of the system at work, the journal has another interesting page.   No, it doesn't look like a Klingon War Bird decloaking (although I can imagine how it could someday), but you can watch an engineer become invisible to microwaves.