Gears are fundamental components in mechanical systems, but they have many design considerations.  For example, you might not be able to get a gear ratio you want in the type of gear you want to use.  This handy primer to gears showed up in my mail today and I thought it might be something readers could use.

What’s the Difference Between Spur, Helical, Bevel, and Worm Gears? 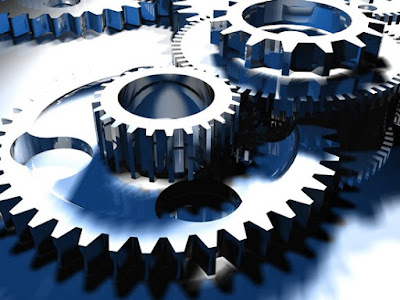 These are spur gears, probably the most commonly thought of shape.  Except they're not shaped correctly in this picture (from that link).

Gears are available in practically limitless sizes and shapes from specialty businesses (such as), but machinists should learn to cut them, too.  The shape of a gear tooth isn't really a triangle like the one closest to the front in this picture, and anything with the very asymmetrical tooth shape and spacing of that one in the top rear is custom - if it's anything other than a computer artist's idea.  Spur gears are cut in a mathematical curve called an involute.  The edges of the gear that make contact are curved, not straight like these pictures.   It reduces wear, reduces noise, and improves power transfer.  What's not to like?

How do you cut a complex shape like this?  Today, you go to one of your favorite tool stores and buy an involute cutter.  They're kind of pricey, but you don't need tons of them.  I'm pretty sure the involute cutters are ground, not cut.

There has to be weeks worth of videos to watch on gear cutting on YouTube.  One method I've seen uses the milling machine with a fourth (rotary) axis.  The process is to put the blank on the fourth axis (indexed or full rotary), sticking out so the gear blank is perpendicular to the table.  Put the cutter on the motor spindle, and position it so it will cut at the point on the gear blank so the flat of the cutter (parallel to the table) is perpendicular to the gear blank - the 9:00 position.  Make a cut; you'll usually have to smoothly feed the work into the cutter as it's spinning until the cut is fully formed; then retract the cutter, index to where the next tooth will be, make the next cut, and so on.  There are really a few basic ways of making gears - this one is pretty simple for the home shop, but won't cut helical gears. 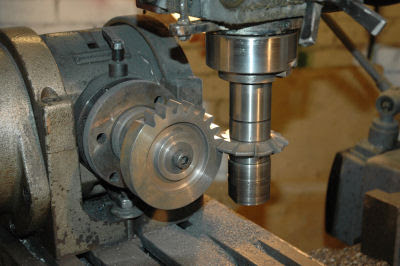 There are literally books written on this subject.  Many books.  This is the barest of introductions.  Sound like something you'd like to do?