As long as that pace includes zero.  (Ever notice I like to use alliteration if I can find one?)

When I last talked about the big CNC conversion project (aside from the Great Ball Nut Removal Tool Fiasco), I had completed the long hole down the cross slide to bring oil to the middle of the slide from a fitting that will go in on the right end.  The two eighth inch holes crossed.  Since then I've been drilling the rest of the oil holes and am finally getting ready to start tapping holes and connecting oil fittings.  The right end of the slide looks like this now. 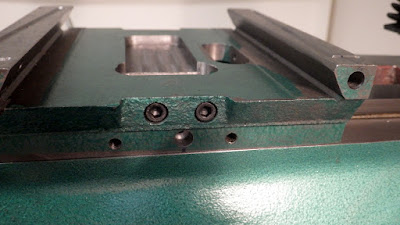 The long hole is visible in the upper right.  It's going to get tapped for a straight oil fitting that sends the oil pumped down that hole to the 1/8" channel and to the surface.  The big hole you see is from an "R" drill bit (0.339") and goes in a couple of inches.  The 1/8" hole extends from there.  In the middle of this picture you'll see another large hole approximately centered between and below the two cap screws.  This is the same size hole and will be tapped for another one of those fittings.  That large hole is connected to another 1/8" hole to drain a little oil in that line down onto the ways that it's sitting on.  There's a matching pair of holes like that on the opposite end of the slide so that both "Y" ways get oiled.  The big R holes each get a screw-in, 1/8"-27 NPT fitting.

The front required a little "shuckin' and jivin'" - making it up on the fly. 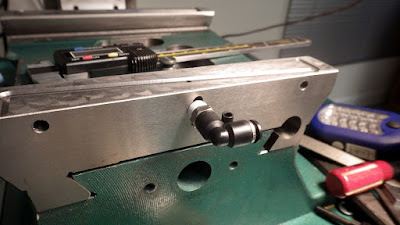 Hard to see in this picture, but there are two threaded holes in the middle of the front of the slide.  Their sole purpose in life is to hold a plastic indicator that marks the centerline of the slide so that when they're cranking the table by hand, an operator can read a scale that shows how far off center the table is.  I had to drill a hole between them, and just used a number Hoss rattled off.  Hoss put his in too high and the tap broke the surface above it, in front of the oil groove.  He had to grind his oil fixture flush with the surface of the way and make sure it was flat and won't mess up his X axis.  So he said to knock that hole down to about 0.3" from the surface allow the fitting to not break the surface, and it would do that.  Unfortunately, the big hole I drilled overlapped the existing top screw hole and I'll have to patch that with Bond-o or something.  There's a hole visible in the middle of the oil groove right above that tubing fixture and a vertical 1/8" hole that allows oil to pump up into this oil groove.

Unfortunately, this is as far as I get for a few days.  My 1/8-27 tap is a piece 'o crap and barely cuts the cast iron.  The cast iron wore away as much of the tap as the tap cut cast iron.  I need a better tap. 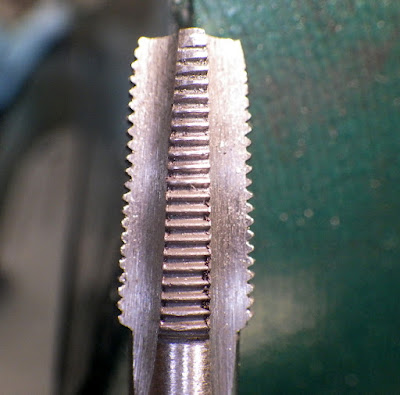 Gosh, this tap was in a Horrible Freight Tap and die set - this one, I think.  The fact that the "40 piece set" cost less than half of what some of the "real" taps I'm looking at cost should be a clue.  And some of the good taps would buy about 20 of those sets.  I'm actually surprised all the other taps in the set worked as well as they have, but to be honest, I think they've always been used in aluminum.

The best case is that a new tap gets delivered Monday or Tuesday; the local Grainger doesn't have one in stock.  Time to study some more on how this whole thing goes back together.  Maybe the Orange or Blue Borg has one.