Today's the day to be watching Italy for the next major populist vote.  Polls are still open in Italy as I write this, and we may know the outcome by evening east coast time.  If everything goes according to the prevailing opinion, Italy will vote it's own Brexit or Trumpening, and that will lead to the end of the European Union.  A little refresher from my October 9th piece.


Like most of the Western world, Italy is going through a period of anger with their elected leaders, thinking them a corrupt, venal, criminal ruling class interested only in their own betterment at the expense of taxpayers.  In 2007, Beppe Grillo, an Italian actor and comedian, launched Vaffanculo Day to register that disgust with politics.  Those of us not from areas where Italian is spoken every day are probably not aware that “vaffanculo” is Italian for “f*** you” (you'll also see that interpreted as “f*** off”).

M5S has promised to hold a vote to leave the euro and return to Italy’s old currency, the lira, as soon as they’re in power. Under these circumstances it would probably pass.

Zerohedge is predicting a Vaffanculo Day, and the M5S sweeping into control and the beginning of the end for the European Union.

In a possibly unrelated story, they also report on Non Governmental Organizations smuggling "immigrants" into Europe on an industrial scale.  Directly into Italy.  If there's going to be one thing that increases the chances of the population giving the elitists the finger, this is could do it.  If not, it will add more pressure to split the EU as the "African immigrants" spread their campaign of rape and murder across the continent. 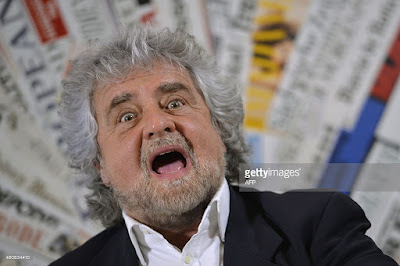 Beppe Grillo, who started it going.