New Frontiers in "There's Never A Shortage of Things to Fix"

I don't know about the rest of you, but there's always something around here that needs to be fixed.  Most of the time it's something I've never tried to fix before and frequently something with no electronics content - what I consider my "home field advantage".

The first one was the carpet attachment for our house cleaner.  It's not this model Panasonic, but the same basic concept: there's a canister with the dust bag, power on/off switch and a connector for the hose to plug into.  The hose has wires embedded in it that brings the power to carpet attachment. 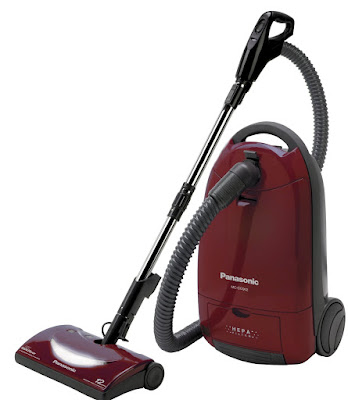 On Sunday, Mrs. Graybeard got the thing out to clean our couple of throw rugs and the carpet attachment wouldn't turn on.  Before going too far into the whole assembly, she opened up the carpet attachment and verified that the belt was good.  I eventually came over and volunteered to dive in.  We verified that everything in the beater was wired up and motor seemed good, so now we're down to the main vacuum or the hose.  We quickly isolated it to the wires that run down the hose, and eventually bring power into the carpet beater.  There are two wires, one was open from end to end.

It took more time to take it apart because there are single piece molded plastic parts on both ends.  On the vacuum cleaner end, there's a rotary joint, so the hose can spin around.  On the handle end, it just ends in the handle, which has a switch.  A wire had pulled out of its connector in the end of the hose nearest the handle.  Aside from a piece of duct tape to hold together a rubbery plastic elbow that I cut open to inspect the wires (visible in the picture at the top of the hose, going into the connector on the body), it's just as it was before the wire pulled out.

Once that was fixed, on Wednesday I went to turn on my Shop-Vac to clean up some chips and residue on the lathe (where I'm working on the cylinder for my flame eater engine).  The Shop-Vac didn't turn on - I had used it the day before.  Putting an ohmmeter across the AC plug, I could see the motor never got connected.  Now it's down to the motor, the power switch or the power cord.  I started looking for a circuit breaker or fuse or something.  Nothing found.

After some research online and YouTube, I found that the motors in Shop-Vacs have some sort of fuse attached to the motor with a molded plastic holder.  With a couple of videos watched, I went and tore down the vacuum until I could hold the motor in my hand.  Sure enough, the fuse was open.  Only it's not a fuse.  After unsuccessfully trying to find one for this specific model Shop-Vac , I found that the thing is built in an amazingly crude manner.  See that little yellow square? 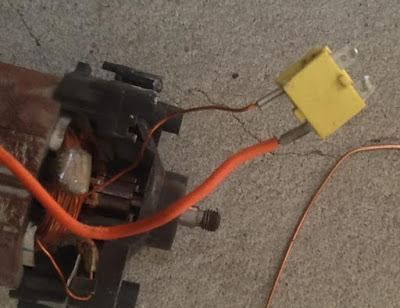 This is a pic from online, not from mine, but it looks exactly like mine.  The orange wire goes to the power switch and the copper wire goes to a stator on the motor.  Inside the yellow plastic piece, it has two sorta V-or U-shaped spring clips that you shove the flat terminals under (these are crimped onto the orange and copper leads) and these clips ride on what looks like a short piece of wire.  Only it's not wire, it's solder.  That's right: when the motor draws too much current, the solder melts and disconnects the power.  Looking at the terminals in mine, it's hard to see how it could not work, since only about an eighth inch (or less) of solder wire looks like something other than pristine wire.

I spent my entire career in high reliability electronics and I know that influences my thinking, but when I understood what they were doing, I was appalled.  Think of the numbers of Shop Vacs that get thrown out because a little piece of solder (fusible link) opened and there's really nothing substantially wrong with the motor.  For some reason, the motor drew too much current and blew the fuse.  If it was a real circuit breaker, maybe add a buck or two to the cost, you could just press a button and reset the fuse.  Maybe let it cool down, first.  Heck, letting it cool down overnight makes more sense than using a piece of solder and throwing it out when it opens.

Better yet, a thermal fuse that opens if it overheats and then resets itself when it cools down enough.

Shop-Vac has a warranty, and I read that if you had proof of purchase and contacted them, they'd send you a new motor.  Otherwise the motor cost what a whole new Shop-Vac costs.

I spent a lot of time agonizing over this, because I don't really have numbers on what the "fuse" needs to do.  I could put a piece of solder in there and call it a fuse.  I could put a piece of copper wire in and call it the fuse.  Maybe the solder is 20 ga. wire while the copper would be 30 ga,.  At some point either one will melt. Whether that's before or after the vacuum catches fire is something I can't answer.

I eventually just dialed up a bit of "you're over complicating things", found the thickest solder I have, wound a double strand of it (to approximate the original's size) and put the vacuum back together.  Works like a charm.  I used it a half dozen times today, a few seconds to maybe a minute at a time.

Will it hold up?  Time will tell.