Perhaps you saw the statement from Ruger within the last week or so, saying they have to prepare a report because of a shareholder vote but they will not change their business.  If you missed their statement, I repeat it here:

As our CEO explained, “we are Americans who work together to produce rugged, reliable, innovative and affordable firearms for responsible citizens.  We are staunch supporters of the Second Amendment not because we make firearms, but because we cherish the rights conferred by it.  We understand the importance of those rights and, as importantly, recognize that allowing our constitutionally protected freedoms to be eroded for the sake of political expediency is the wrong approach for our Company, for our industry, for our customers, and for our country.  We are arms makers for responsible citizens and I want to assure our long-term shareholders and loyal customers that we have no intention of changing that.”

Change their business?  What's going on here?  Where did this come from?

According to the Seattle Times, Ruger (a publicly traded company) has been targeted by gun control forces, specifically Catholic nuns who are trying to make them adopt policies that are bad for the company.


Last week, Sister Judy, who lives in a convent in Seattle’s Wedgwood neighborhood, helped orchestrate what is believed to be the first activist-led shareholder revolt at an American gun manufacturer.

The size of the nuns’ win appeared to startle the gun industry. It also came as a welcome shock to the gun-control movement, which was long accustomed to being ignored by the big businesses at the center of the gun debate.

“This is our biggest win, by far, in 20 years of pushing corporations for social change,” Byron said Tuesday. “When they announced it, I couldn’t believe it. I about fell out of my chair.”

Unlike conventional investors, the nuns buy stock specifically so they can go to stockholder meetings and propose gun control initiatives.  Rather than investing in a company for its growth potential, the nuns invest in it to try to make it do things in compliance with their view of social justice.


Out of a small office in the Roosevelt neighborhood, Byron has for two decades run a campaign to get corporations to include “good works” in their profit-making. It’s called the Northwest Coalition for Responsible Investment. The strategy is to first buy stock and then request an audience with corporate boards or CEOs. If that doesn’t work, the nuns take it up a notch by petitioning directly to the company’s owners — the shareholders.

These resolutions almost always lose. In the past three years, of 56 corporate resolutions filed by the group, only one was approved by a vote of the shareholders (in 2017, when Exxon’s shareholders agreed to force the company to report on how climate change will affect its long-term business.)

Sturm Ruger ignored the nuns’ request for a meeting. Big mistake: As anyone who has ever been to a Catholic fundraising breakfast can attest, nuns can be very persistent.

By then the nuns owned the minimum amount of stock ($2,000 worth) required to file a formal resolution. The one for Sturm Ruger called on the company to track incidents of violence involving its firearms; to reveal what it’s doing to make guns safer, including research on “smart gun” technology; and to report on the risks that gun violence poses to the company’s reputation and finances.

As always, the gun grabbers don't know what they're talking about.  They're laboring under the bad conception that gun sellers are unregulated, not that they're regulated every step of the way from the factory receiving raw materials until a buyer at a gun store undergoes background checks and fills out a Federal form before getting their gun.  They completely miss the fact that the vast majority of guns used in crimes are stolen and whether Ruger's products are used in a crime or not as nothing to do with Ruger.

As I'm sure you'd guess, the nuns say “We’re not trying to get rid of guns,” they're just trying to improve gun safety.

The Seattle Times is clearly in favor of what the nuns are doing, and I expect that.  More troubling to me is that they imply the investment company BlackRock is with the nuns.  I went to their link to a statement by BlackRock and they say they are not shareholders of any gun company.


There are three publicly traded companies in the US whose primary business is firearms manufacturing: American Outdoor Brands, Vista Outdoor and Sturm, Ruger. BlackRock holds none of these firearms manufacturers in our active equity portfolios (where stocks are selected by our portfolio managers within guidelines agreed to by clients). In BlackRock’s index equity products (where stocks are determined by third-party index providers) – these three companies represent 0.01% of total assets.

Exact details of what BlackRock has discussed with Ruger and the others are confidential, however in that linked piece, they mention the kinds of things they ask the companies and it implies they don't know enough about what they're investing in.  To excerpt the two that seem the worst:
Do those sound like questions from someone who understands firearm sales to you?  Where do they find retailers who don't require background checks?  A company the size of Ruger sells most of their inventory to wholesalers - distributors - who sell to retailers.  Do they think these companies don't follow federal laws?  I don't expect everyone at BlackRock to be familiar with these laws, but I do expect anyone buying into these companies to learn about their business, and I especially expect anyone who wants to lecture the industry to know more than I see here.  Should BlackRock investors demand they get educated?

The decision to be a publicly traded company vs. privately held is a big decision.  It brings opportunities for raising money for expansion.  That your company can be taken over by a big enough stock buyer, and driven into the ground is a drawback that plays out in many mergers and acquisitions. 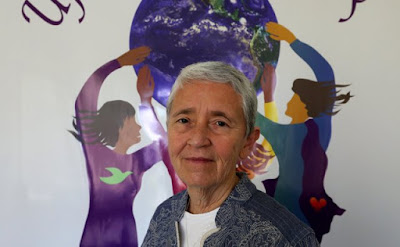